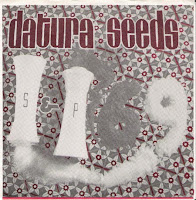 Back in October of 2007 when this blog was in it's relative infancy, I shared one of my all time favorite albums that has yet to make it into the digital age - The Datura Seeds Who Do You Want It to Be? The Seeds were an outgrowth of Indianapolis' hardcore stalwarts the Zero Boys, who's frontman Paul Mahern made a rather seamless transition to the warmer (albeit slower) textures and tones of power pop. The album is for the taking by clicking the link above, but if you'd care for an appetizer or dessert, this single contains an exclusive b-side, "D.A. Pop," with the D & A likely referencing one of Mahern's other musical endeavors, Dandelion Abortion. It's flipside, "S&P '69," also the leadoff cut on Who Do You Want..., concerns an interracial romance, hence the salt and pepper shakers on the sleeve. Aside from the album, a comp track (which I'll try to get to later) and a couple of demos, this sums up the Datura Seeds all too slim discography. Enjoy.