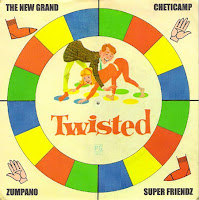 This is one of my favorite 7" inch compilations of the twentieth century, featuring an exclusive song from Zumpano (featuring A.C. (Carl) Newman who went on to the much more recognized New Pornographers). BTW, you can partake in a double shot of Zumpano's singles right here.


Halifax pop-rawkers Super Friendz also make an appearance with what may well be their least heard song, "Ladies Man in Exile," and The New Grand (featured on Wilfully Obscure in '08) present a demo version of "A Flair For Sex," which would be rerecorded for their sophomore LP Incognito. Twisted may still be available from the label that issued it, so of you dig it, go here and inquire about obtaining a personal copy. I almost neglected to mention that all four groups featured are Canadian.
Speaking of Can-indie rock, Thrush Hermit, one of the key contemporaries to all of the aforementioned has wrapped a short string of reunion shows, and this week will be releasing a limited edition six CD/two DVD discography box set. No joke, and the tracklist is drool-worthy to say the least. You can order it from Maple Music.

Amazing. I love your blog.

May I request a re-up of this comp?