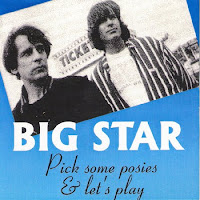 Children by the millions mourn for Alex Chilton, and I suppose you can count me among one of them. I never felt a connection to the Big Star frontman, rather his music - an enormous one at that. Ultimately, I'm not here to eulogize (though there are a couple of excellent online articles to check out). There's no such thing as a convenient time to die, but what makes Chilton's March 17th passing all the more tragic and ironic is that Big Star were not only going to perform at the presently underway SXSW festival in Austin, the band was to be the province of a discussion panel this Saturday dubbed "I Never Travel Far Without A Little Big Star." The panel, which still might proceed (albeit under far different circumstances than initially planned) wasn't to feature Chilton, but instead original bandmates Jody Stephens and Andy Hummel, along with recent Big Star alumni Ken Stringfellow and Jon Auer of the Posies.

Personally, I never would have seated Big Star under the "power pop" umbrella. As much as I treasure and revere #1 Record and Radio City (both required listening, just as much as Pet Sounds or Revolver), I was never able to rationalize the band as ambassadors of the "genre," given the sobering and reflective temperament of so much of their music. This may sound like a gross oversimplification, but to this pair of ears, Big Star were the finest classic rock/pop band that never made the migration to FM radio. The albums speak for themselves, and although I was dismayed with the unrepresentative reunion LP, 2005's In Space, they compensated for it in a major way with last years ultra-comprehensive four-disk, Keep an Eye on the Sky box set. BTW, two years ago I featured a collection of Big Star alternate takes and demos on Wilfully Obscure.

Tonight, I'm sharing a live show from Chicago 1994, featuring the revamped lineup of Chilton/Stephens/Stringfellow/Auer, that would perform many times over the next decade and a half. I'm pretty certain this is a soundboard recording, if not an excellent audience tape. Enjoy.

I was at that show. I think you can hear me fainting...

thank you for recognizing alex. i partied with him before one of his solo shows at the 9:30 club in dc in the 80's. what a wonderful person. alex, your first 2 big star albums really influenced my life. and i agree, "in space" was vastly underrated. i love that cd.

I can see how Big Star might not be thrown in the power pop genre, but I'd put them there if only for "September Gurls". I saw them on this '94 tour, so thanks!

thanks for posting this.

Thanks for this one! I bought it in '95 along with the Replacements bootleg "It Ain't Over 'Til the Fat Roadies Play," but because of the poor audio quality — it sure sounds to me like it was recorded from the audience — I sold it back a few years later. I'm glad to hear it again, though, just like when you posted that Replacements tribute CD "Sorry Ma, Forgot to Let Out the Cat" two years ago.

I wouldn't call Big Star a power-pop band either, but maybe that's just because I don't like a lot of power pop, which is usually missing the R&B elements that added so much to the Beatles' and Big Star's brand of pop.

I was at this show, thanks for posting it, it is great to hear it again.

I was also at this concert, and am almost certain that it is an audience tape.
There is/was a ubiquitous taper who always got the band's permission, and was able to set up his stereo condenser mic at the soundboard. And I saw him set up there.
I am (almost certainly) the one screaming at the beginning of "The Ballad of El Goodo".
Anyway, I digress, one of the best shows that I have ever been to, Thanks for this, and rest in peace, Alex.

WOW...I was at this show!! Is there a way for you to repost it?
Thank you in advance.

Thank you so much for updating the link!

Oh, I missed your update, could you be so kind and repost it again? Thanks a lot in advance.