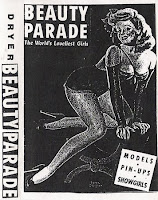 During the mid-90s, if you were situated in the Saratoga Springs/Albany, NY area and had your ear fairly close to the ground, you may remember the band Dryer as being something of a club and college radio staple. Apparently back together and on the verge of releasing a new album Dryer is/were a co-ed, indie-rock trio who bore a resemblance to Superchunk and Velocity Girl, though they didn't completely exude the excitement of either. There were at least two Dryer CDs and two 7" eps that rolled off the presses between 1994-98, but a little sidebar to their discography was this rather endearing DIY cassette I'm sharing. The ten selections on Beauty Parade were culled from a Paint Chip Records compilation called Fear Into Fuel, a bunch of demo tracks recorded for Atlantic Records, and live songs from a 1994 performance at Bogie's nightclub in Albany. I'm sure this tape was limited to a few hundred copies. Anyone want to hear more from Dryer, let me know.

definitely would like to hear more. i was in the ss/albany area from time to time in the mid-90s and remember this band fondly.

They weren't as good as Chomp!

Will try to get a couple of their singles up in the near future.

this is amazing, kinda reminds me of BITCHIN' and Mary Timony in places. if there's more, please post or link:)

Dryer was awesome, and Bob and Joel's later work with the Sixfifteens should not be overlooked either. Thanks for the post, I haven't heard this tape in 15 years!

Is it possible to re-up, please?