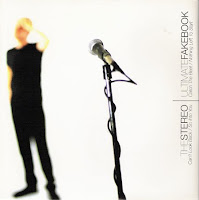 This was something of a dream split single for me. Two fantastically phenomenal and talented bands specializing in high-strung power-pop with hooks and chops to die for. I'm not sure if they toured together, but if they did it would have been one corker of a ticket. I featured the Ultimate Fakebook on here a couple years ago, or more specifically the indie version of their sophomore album, This Will Be Laughing Week. Don't hold me to this, but I believe that their side of this 7" was recorded at the same time as that album. The bittersweet "Catch the Beat" equals anything on Laughing Week. The song later landed on Fakebook's parting shot Before We Spark, while "Nothing Left to Start" was later appended to the reissue of their first album, Electric Kissing Parties. 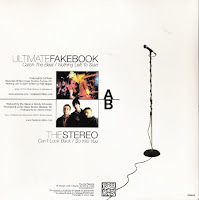 Minneapolis' The Stereo, helmed by one Jamie Woolford made as deep an impression on me as the aforementioned, especially their brilliant grand finale, 2002's Rewind + Record which earned a pretty high spot on my '00s albums of the decade list. Both of their scintillating contributions to this slab of wax were rerecorded for their previous album, No Traffic from 2000. This single is likely long gone, but you can obtain the two Stereo albums I mentioned and more from Fueled By Ramen. After the Stereo folded, Jamie went on to the like minded Let Go, who I'd also heartily give a thumbs up.

Ultimate Fakebook
01. Catch the Beat
02. Nothing Left to Start

Always wanted to check out UFB but never got around to it -- I'm gonna go back and grab the album you posted, thanks...

It's a dilly. Enjoy.

thanks for sharing this Spavid!

Just thought it was time to say a big thank you for a terrific blog, putting me back on to some old faves and a lot of previously undiscovered gems...

"Nothing Left To Start" was actually penned by yours truly for my Kansas Power Trash outfit "Truck Stop Love." Fakebook drummer Eric Melin was an original member of TSL. Our version was originally released as a Split 7" with Lawrence, KS natives Action Man. Check us out sometime. Thanks for posting this.
Rich Yarges

Hey Rich. Had no idea. I've actually got a couple of TSL cds, but not the split single you mentioned. Thanks for the info.

I usually listen loud music in my house, that´s why I bought a big stereo, I like to spend my time at home I think it was the costa rica investment opportunities because I acquired my house and now I can do everything I want.

wondeful!!!this whole information is absolutely useful and interesting. i like this blog because is easily understandable, and that is invaluable to the readers. I wanted to buy viagra online, and i saw this blog. I think this information will be useful for me specially because I want to get a great stereo and take advantage about it.