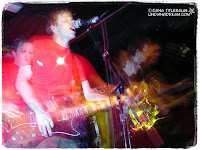 An Austin, TX outfit called Schatzi made the "Dubya" years at least a little more tolerable with two choice releases on Mammoth Records - the Death of the Alphabet ep in 2001, and the ensuing long player, Fifty Reasons to Explode a year later. Marrying seismic hooks to booming power chords, a la '90s Weezer and Smeared-era Sloan, but with even smarter songs than both, Schatzi possessed a winning formula, but received inadequate exposure (BTW, Fifty Reasons made it into my top-95 albums list of the decade). The band went their separate ways not long after some 2003 recording sessions and a national tour with the Ultimate Fakebook, but even after their demise, I was starving for more.


Via their defunct webpage, I learned of a pre-Mammoth Records release, Joanie Loves Schatzi, that the quartet issued on their own Humongous Fungus label. To this day I have never come across a copy of this unspeakably impossible to locate disk, but about two years ago I was fortunate enough to bag high quality MP3s of the entire album, which I'm sharing with you today. Joanie... doesn't scale the heights of their later releases, but a respectable and worthy debut nonetheless. BTW, can anyone post the cover for this? The best I could do is a teeny tiny thumbnail that I've included in the folder.


If you want to bone up on the history of Schatzi, go no further than this thorough, online article. Cheap hard copies of the Alphabet ep and Fifty Reasons are all over Ebay and Amazon.
01. Nadine
02. Green Velvet Neckbrace
03. Dirty Room Lament
04. Selfish Please
05. Snowflake
06. Stalking The Girl (With Wintergreen Stockings)
07. Acetaminophen
08. All
09. Surrogate Savior
10. Laika
11. Smashplate
12. Radiate
13. Mr. Kent, You're Out Of Gas

though i don't live there, a few months ago i saw a TON of this record down in Austin, used, for cheap, at Cheapo Discs. if ya know anyone down in Austin for SXSW you might see if they could snag 'em.

Actually I do. Thanks for the tip!

Thanks spavid. The other CD's are great, but I haven't heard this one. Looking forward to it.
/ Jonas