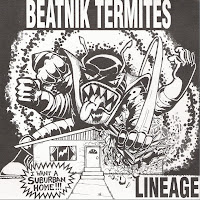 I'm not terribly familiar with the Beatnik Termites outside of a Ramones covers album (Pleasant Dreams revisited in it's entirety) and this 7" wherein they tip their hat to the Descendents and All. For those of you that plead ignorant to either of these groups, the Descendents were a pioneering, '80s pop-punk/hardcore band from southern Cali that influenced thousands of others for decades to come. When singer extraordinaire Milo Aukerman divorced himself from the Descendents the remainder of the band soldiered on with a series of lead singles including Dave Smalley, Scott Reynolds, and Chad Price. The Termites pulverize their way through one of the Descendents most glorious offerings, "Suburban Home," a tongue in cheek diatribe touting the virtues of conformity, while the flipside "Minute," is an All cover. The label that put this out, Coolidge Records also released a compilation CD of Descendents covers (29 to be exact) called Homage that's worth seeking out, if not downloading. You want to be stereotyped, you want to be classified...

A. Suburban Home
B. Minute

Beatnik Termites are great. Came out of Cleveland in the mid-late 80s. Most of their full-lengths (originally released on smaller labels) are now in print on Insubordination Records. Recommended if you like oldies/surf pop/bubblegum inspired pop punk.

Agreed -- terrific band. This single aside, the Descendents influence really wasn't common for them. The Beatnik Termites were bubblegum-inspired pop punk (like the sweeter Queers stuff) with lots of vocal harmonizing. Even among other pop-punk bands, who emphasized oohs and whoas, the Termites' harmonies stood out.

The link is broken :(