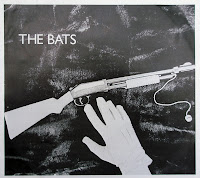 A couple years I shared a vinyl sourced MP3 copy of How Pop Can You Get?, the once out of print and exceedingly hard to find album by The Bats, a Connecticut-based band from the early '80s who seemed to make a huge impression on whomever was in earshot of their album. I was asked to remove the album from Wilfully Obscure after it was re-released digitally, but more on that and how you can hear it for yourself a little later.


Preceding the aforementioned album, The Bats issued a single two years prior on the local Gustav label, containing "Popgun" and a solid run-through of the Beatles "Tell Me Why." "Popgun" a brisk, keyboard-ridden slice of turn-of-the-decade power pop was nearly as stunning as anything to come on the forthcoming LP. The song wasn't originally included on How Pop... but was appended as a bonus cut to the digital version. The flipside however was not, and remains exclusive to this wax. Consider this single as your introduction to the Bats, and if you like what you hear, I urge you to purchase How Pop Can You Get? from iTunes, Emusic, or Amazon Downloads, as it's quite likely to be the wisest money you'll ever spend on a digital download. It's up there with the best of 20/20, Shoes, and in some ways it offers even more than those bands ever did. BTW, the Bats featured a guy by the name of Jon Brion in their lineup, who went on to much greater success a couple decades on.
A. Popgun
B. Tell Me Why

Buy the reissue here, or through Insound.
Posted by spavid at 4:12 PM

I didn't think this would top the title track from their LP, but wow-- "Popgun" is fantastically catchy.

Although I don't have an affinity to the Beatles, this album caught my attention the first time I listened to it. Now I'm waiting for something. I bought my album and after getting out of the store somebody handed over a tablet of Viagra Online with no reason at all.

Awesome! I got my username for everything from this A-Side and have been searching for their Beatles cover for quite some time. Thank you!