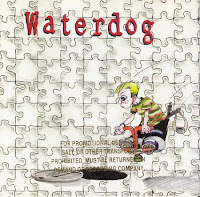 So often I'm tempted on here to apply the word "forgotten" to so many groups that I write about, but in many cases, such as Waterdog's, I don't they were in the public consciousness to begin with, thus rendering that adjective pointless. Anyway, let's get down to brass tacks. In the post-Dookie gold rush of 1994, it seemed like every record label in sight referred to their Pavlovian instincts (and checkbooks) in an attempt to sign anything brandishing spiky hair and three magic power chords. Atlantic Records was no exception, and they placed their bets on a quartet of safe, pop-addled neuvo-punks from Providence, RI dubbed Waterdog. Unfortunately, by the time their self titled LP hit the market in 1995 the label seemingly forgot the group was even on their roster, and as a such, said album sank virtually as soon it was undocked onto Rhode Island Sound. About half a year after Waterdog's very quiet release, I was informed by someone associated with Atlantic that it failed to move even a mere one-thousand units. As for myself, I can attest that to this day I have yet to see a copy of this album without one of those marring promotional stamps gracing the booklet.


The production and promotion expenses were likely never recouped, and I'm assuming Waterdog went their separate ways not long after. Yet even the most cursory listen to this album reveals that the band was nearly as adept as Green Day, not to mention lesser known quantities like MxPx and Down By Law. Additionally, the bright, exuberant vibe Waterdog exude here seemed to predate much of the Drive-Thru Records roster that would anxiously be waiting on deck in a few years. If Atlantic had prioritized these guys a tenth of what they did with Jewel and Hootie they would've had another million seller on their hands (and none of those pesky MP3s to kill sales, given Waterdog's '95 release date). Not much is out there on the band in question, but guitarist Terry "Dread" Linehan would ironically enough go onto be a touring guitarist with Green Day, and form a new band, Hope Anchor RI. As a bonus I'm also including Waterdog's faithful spin on the Jam's "In the City."

funny story - I remember seeing these guys play and thinking they were really good. I went up to the guys in the band to chat with them after the show about the possibility of doing a 7" with them (on Popkid Records).

That was when they told me they had a album coming out, and it was on some major label. You kinda new right then and there they were destined to be budget-bun heroes.

Saw them maybe 1 or 2 more times after the album came out, and then poof - they were gone.

Yeah, it's like that for a lot of virgin "punk" bands that sign to a major label. Atomic Boy and Klover come to mind (remember them)? There were even some groups from that era that signed, recorded, and ended up having their albums shelved entirely. Damaged goods from that point on I'm afraid.

hah, funny. i got a cassette copy of this to review from atlantic for my 'zine back in 94 or 95.. i remember thinking it was OK, but yeah.. this band was definitely destined to be "budget bin heroes" with all those factors in play.

wew, i have this cassette album.
been looking for the mp3's.thanks.

there are two bands with this "waterdog" name.that's why it difficult to find in the net,or perhaps, no one think that this band was exist,lol.
or because the "now" waterdog more familiar.

15 year old me loved these guys.

i saw them open for no doubt, who was opening for dancehall crashers at the phoenix theater in petaluma, ca. i'm really not sure of the date.

i bought their t-shirt, as did a few friends of mine. we bought t shirts because they didn't have any albums for sale. monday morning one of my friends was really excited to point out that the back of the shirt, which had the pogo stick kid with the slingshot on the back surrounded by lines and lines of the word "blah" in courier font, actually had one "fuck" buried in all the lines.

a little while later, i took an elective course at sonoma state university to have my own unsupervised radio show. in the free bin at the studio one day, 16 year old me found one of those "for promotional use only" stamped cd's.

i lent it to a girl named jessica and never saw the cd again.

thanks for the upload!

I saw these guys open for Dance Hall Crashers...bought the CD either at the show or soon after. No promo stamps on my booklet!

This is still one of my favorite pop-punk albums!

one of the few that actually purchased after hearing limited airplay in providence - i lived there at he time. saw them play live twice.

I actually own a copy with out the promo stamp on the front. It took some searching on eBay, but definitely worth it for the collector nerd in me.

been searching for this in decades! thanks for sharing it man! i have a cassete tape of these guys and bought it out of the blue but once i played it in my player, i fell in love with their music. this may seem "high-school nostalgia" for me. :)

this file has been deleted, any chance i can get a new link? i was one of the many promo CD owners thanks to alan, above.

The link has been updated. Thanks for alerting me Michael.

I have that great CD. It´s one of my most preciated thing. I´m from Argentina and i think that it´s the one Cd of Waterdog in the entire country. Sorry for my poor english.

I have that great CD. It´s one of my most preciated thing. I´m from Argentina and i think that it´s the one Cd of Waterdog in the entire country. Sorry for my poor english.

I love this CD, I have a promo copy too... I think I picked it up in a bargain bin or flea market back in '96. I remember on my AOL profile back in the day mentioning "Waterdog" in the slew of bands I loaded my info areas with and was contacted by someone that had Waterdog's original demo tape and was thinking about making it available digitally... of course, that was before the explosion of MP3s/Napster around '99. I mentioned I was interested but never heard anything back unfortunately... that said... there is a demo tape out there somewhere. Maybe someday someone will get ahold of it and rip it into MP3s. Billy Bouchard went on to play/sing in The Effection who released an awesome CD on Adeline Records back in the early 2000s. I think now he does folk stuff. But, if anyone out there knows how or where to get the original demo of Waterdog let me know!

Haha, I bought one of those mere 1000 initial copies. Picked it up at Circuit City in Manchester, NH. However, if memory serves brand new it was only 7.00 or 8.00 dollars. Being from New England this band holds a special place. Still have the original cd.

Haha, I bought one of those mere 1000 initial copies. Picked it up at Circuit City in Manchester, NH. However, if memory serves brand new it was only 7.00 or 8.00 dollars. Being from New England this band holds a special place. Still have the original cd.

I bought this Cd in 1999 at a CD Warehouse and have been looking for it ever since it was stolen in 2003... This Cd is amazing and I would love to get my hands on another copy. If anybody knows how to get another copy of this album, please email me at scmvox@gmail.com

I bought this Cd in 1999 at a CD Warehouse and have been looking for it ever since it was stolen in 2003... This Cd is amazing and I would love to get my hands on another copy. If anybody knows how to get another copy of this album, please email me at scmvox@gmail.com

Super curious to hear this.
Any chance of a reup?
Thanks in advance.