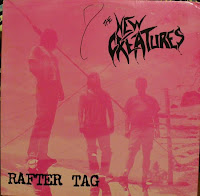 For better or worse, The New Creature's Rafter Tag will go down in the annals of Dayton, OH rock history merely as a footnote to a far more successful aggregation, Guided By Voices...but an interesting footnote at that. A trio comprised of Greg Demos, Don Thrasher, and Bill Hustad, the first of these two luminaries would go on to participate in various and sundry configurations of GBV's rather amorphous lineup over the years to come. Robert Pollard himself had a finger in the Rafter Tag proceedings as well, contributing faintly heard backing vocals to three selections: "Life's Masquerade," "Collapse," and a cover of Spirit's endearing, early-70s ballad, "Nature's Way." A bit more about that remake. Unlike Pollard's main gig, the Creatures were amateurish riff brokers, with occasional acid and psych inclinations. Bearing that in mind, Demo's exaggerated vocal timbre is embarrassing at moments, thereby butchering the aforementioned "Nature's Way" in colossal fashion. Had Pollard rightfully been given the lead vocal reins on this classic, not only could he have salvaged it, the results might have turned out magnificent. Twas not to be I suppose, but Rafter Tag isn't entirely without merit. The Soul Asylum-ish thrust of "Pale White Horse" is piping hot, and other originals, namely "Spirits (Free part II)" and the opening "Icon in the Fields" kick up a little dust to boot. Worth a spin or two. BTW, there were other New Creatures releases, including the 2004 collection Penelope Flowers, issued by and available from Smog Veil Records.

Thank you very much!! I've liked this album a lot. All the best.