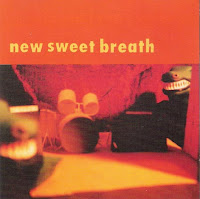 One of my main moral quandaries in regards to running this blog is that I could potentially be diminishing the sales of the very artists I attempt to promote and/or archive, which is why I stick with out of print or commercially unavailable releases. New Sweet Breath one of my top-tier '90s favorites (who I dedicated a post to last year that strictly dealt with their singles) pose a particular dilemma. Their three proper albums (Supersound Speedway, Demolition Theater, and A Shotgun Down an Avalanche) as well as their parting ep (Acceleration & Distortion) are all out of print, but still available for purchase from the respective labels that released them. In light of this fact, I cannot in good conscience share them in their entirety, but instead have assembled a collection of two (or three) songs apiece from each of them as an incentive of sorts for you to do some further investigation by visiting the links I've provided below, and hopefully parting with a few well spent dollars (or Euros, or pounds, etc). 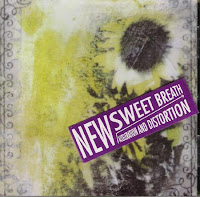 Unbeknownst to even the most scholarly of ear-to-the-ground indie-rock geeks, Seattle's New Sweet Breath set up shop at the twilight of grunge's halcyon era. Immigrating from Lincoln, NE in the early '90s, the Graig Markel-helmed trio, also consisting of bassist Nicholas S. Rock and drummer Daze E. Hazel specialized in fuzzed-to-the-hilt, distorto indie-punk, coupling static-ridden noize with a melodic sensibility rivaling Superchunk and Husker Du. Each of their aforementioned singles were truly the best of both whirls, and their full-lengths were just as stimulating. I've presented the songs in chronological order to give you a sense of their creative and performance progression. "Broken Toys," the fifth track was only available on the vinyl version of their sophomore disk, Demolition Theatre, and from what I can tell that incarnation of the album is sold out (though the CD isn't).


Graig Markel has since pursued a solo career and now fronts the markedly different electronica endeavor The Animals at Night.

Absolutely LOVED New Sweet Breath. We were lucky enough to host them in Charleston SC on two of their tours during their heyday. Amazing music, which was even better live . . . plus they were about the nicest guys you could meet. The tunes are still great today. I'm particularly partial to the singles, plus the first two full-lengths.

The web store for Big Top Records is apparently broke... I couldn't buy there no matter what I tried clicking on.

sad to see that Bring It On isn't on this compilation.

NSB were a great band. I feel lucky that I saw them in the 90's with Sinkhole. I had actually been looking for the first 2 LPs again. Any chance you could post the whole album on those both? This is such a teaser, but definitely appreciated!!!

NSB were a great band. I feel lucky that I saw them in the 90's with Sinkhole. I had actually been looking for the first 2 LPs again. Any chance you could post the whole album on those both? This is such a teaser, but definitely appreciated!!!

I'm now curating the Ringing Ear catalog. First -- thanks for posting this stuff and keeping the memory alive!

Second -- FYI I'm experimenting with different ways of making the back catalog available. In the past couple of years I released the Sinkhole and A.G's albums for free under Creative Commons. Just in the past week I released Bugjuice and the first two New Sweet Breath albums via Tunecore, which is a commercial distributor that gets them into iTunes, Amazon, Spotify, etc. So for those looking for the whole albums, check in your digital music outlet of choice.

I'm not sure which is the best way to do it but I'm curious to see how it goes with Tunecore.