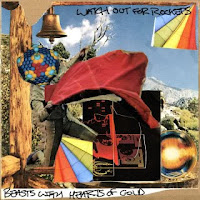 When you have a 42 minute CD teaming with a 20-song tracklisting, boasting such absurd and surreal titles as "Urgent Serpent Merchant," and "Erect Sun Cranes," you just know that Robert Pollard has left a profound impression on the architects of the music within. It so happens I came to this conclusion before hearing one iota of Watch Out for Rockets' Beasts With Hearts of Gold. Although my suspicions were somewhat confirmed (to my satisfaction I might add) I soon discovered that this Austin quartet didn't necessarily worship at the GBV alter as much as I convinced myself at first blush.

A lo-fi to mid-fi, 4-track aesthetic dominates here, which in itself is a glaring similarity to Mr. Pollard and Co., but what sets WOFR apart is the exuberance and experimental inclination that gradually diminished up until the 2005 departure of that iconic, aforementioned group. The fervored "Buckle Your Hair" and "A Lotus Yet" are perhaps the most indicative examples of this, but the more docile "Class Action Pantsuit," and "Headrush Hour" lend a hook-savviness that's equally appreciated. This album also bears a roughhewn resemblance to those early Sebadoh albums and Centro-matic's oft overlooked debut, Redo the Stacks. The keyboards that percolate intermittently are a thoughtful inclusion, but not particularly useful. Beasts does amble occasionally, but then again so did Bee Thousand and Sebadoh III.  Visit WOFR's Myspace page linked above with several additional songs streaming. These guys are also blog-ified.
Posted by spavid at 2:04 PM