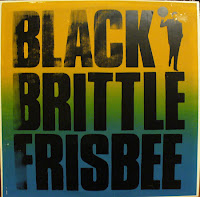 Taken straight from the liner notes of the album insert:

Brittle Black Frisbee is in every sense of the word a compilation.  Without exception, every member of the seven bands on this record has had a say in what the project has become.  The scene in Indianapolis is that way though.  Venues for non-top 40 bands are virtually non-existent, but the quantity and quality of bands thrive.

Well , I'm not sure about the quality quotient, at least in regards to consistency.  Indeed, however, this is an accurate snapshot of the late '80s Indianapolis indie/punk circuit.  BBF was curated in large part by Paul Mahern of Zero Boys and Datura Seeds renown.  The most obvious bait offered on this collection are three tunes from the low-brow as-all-get-out Sloppy Seconds, who would solider on for two more decades as one of the longest running jokes in punk rock.  Pointless is what I say.  As for myself, the real draw here was the otherwise unavailable Datura Seeds nugget of gold  "Eatin' You."  I've featured the Mahern-helmed Seeds on here before, and can best describe them as a sassier and more vigorous spin on Let's Active.  Their Who Do You Want it to Be long-player is a must listen.  Furthermore, if I'm not mistaken, the version of "S&P '69" on here differs from the Toxic Shock single.

Technically from Bloomington, Indiana, you might ascribe Right to Left as the only 'straightforward' pop act on Black Brittle Frisbee, declaring their presence here with measured tempos and insightful songwriting, loosely resembling a quieter REM, or the Posies circa their Failure album.

That about wraps up side two of the album.  Going backwards, the first side is quite a mess, predominately occupied by three rather amateurish, albeit artsy hopefuls - Jot, Modern Vending and Bramble Grit, with the first one of that lot striking me as cheap imitation of the then burgeoning Red Hot Chili Peppers.  Modern Vending's moniker holds more currency than their finished product, and Bramble Grit at their best (say "Alibi in the Nude") would have been a near miss for Homestead Record's roster contemporary to this album.

Right to Left
14. When Company Comes
15. Change the World Around

Worth noting that Right to Left would eventually become The Vulgar Boatmen, one of my favourite guitar pop bands of the early '90s. If you have any more Right to Left stuff kicking around, I'd definitely appreciate it!

I haven't heard this one in years. Great post!!!

Ditto re: Right To Left becoming The Vulgar Boatmen. One of my favorite bands.

I'd be interested in any Vulgar Boatmen related rarities, including early live performances.

Although I commented on this, I don't recall ever downloading it and now I am really dying to hear those Right To Left tracks. So, any chance of a re-up?

The link has just been updated. Thanks for alerting us Bruce.

Thank you, my friend.

Please re-uploaded? Love this Comp I bought it as a kid at show that few of the bands on it played in Ft Wayne. Paul of the Zero Boys had a hand in this record...
Wish I still owned my copy. :(

Link is dead. Could you please re-up?