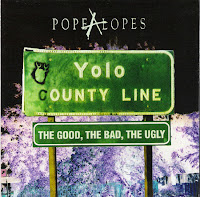 If only every band I was enthusiastic about had the courage and/or the means to release a three-disk, 'warts and all' compendium of radio sessions, comp tracks, demos, and live artifacts.  The contents of the Popealopes DIY, odds-n-sods collection Yolo County Line entails all of the above with a wide range of unreleased and scarce scraps dating from 1985 to the early '90s.  I've explored their first two albums, 1988's An Adders Tale, and the 1990 follow-up Kerosene, in greater detail previously (with the latter still free for the taking), but at the time of that entry I was unaware that virtually three albums worth of archived Popealopes material had been made public, albeit on a very small scale.

To paint Yolo County Line with a broad brush would be both a disservice and an inaccuracy, and the same philosophy would prevail for describing the overall tenor and approach of the Popealopes in general.  Denizens of Davis, CA, the quartet has been hemmed to the lazy and worn-thin "psych-rock/pop" tag in various circles, but theirs is a loose interpretation at best  Save for a healthy dose of Dream Syndicate inspiration, there's nothing paisley about the Popealopes, but the often lackadaisical pace of their songs does sort of lend itself to slacker-esque proclivities, as natural as they may be.  There's are a myriad of covers strewn over the course of this collection, and perhaps they may provide some insight where the band is coming from, including but not limited to "Telegram Sam" (T. Rex), "Pictures" (Galaxie 500), "Happy Nightmare Baby" (Opal), "2000 Light Years From Home" (Stones, duh), and "Crawling Kingsnake" (John Lee Hooker).

Divvied up into three partitions: The Good ( disk one), The Bad (disk two), and The Ugly (disk three), Yolo County... compiler and longtime drummer John Nelson set out to delineate these near-50 cuts based on quality, but those well versed with the Popealopes will find several songs of merit occupying each disk including The Ugly which contains a demo of a previously unreleased song, the jangle-riddled "Almost Out of Reach" that IMO ranks among their career best!  Speaking of demos we also get a sweet demo of the title track to Kerosene that virtually outdoes the album take.  Gold!  Two in-studio sessions for KDVS radio (UC Davis) are okay, but not particularly momentous, and much of the live material reaches the same conclusion, although those covers are interesting!   One of the group's signature tunes, "Poor Tom" turns up here, namely the version culled from the Out Among the Cows Davis, CA compilation album. There's probably a lot more I could expound upon, but the long and short of it all is that it helps to have an appreciation of at least some of the Popes proper albums before delving into this, but then again, maybe not.

Copies of Yolo County... are available directly from  John Nelson, who you can email here.  May I also suggest you inquire about obtaining a copy of An Adders Tale while you're at it?  Popealopes tunes can also be procured for a modest fee over on iTunes and Amazon downloads, who are armed to the teeth with MP3s of the rare Slowest Eye album.  There's a nice Facebook page as well.
Posted by spavid at 5:27 PM