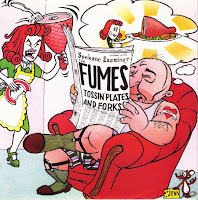 The '90s produced no shortage of rip-snorting, take-no-prisoners, dragstrip punk bands who existed well outside the fringes of grunge and traditional hardcore, but nonetheless possessed the fervor of those firey strains of rock 'n roll.  Key among them were New Bomb Turks, (early) Supersuckers, Zeke, and Nine Pound Hammer.  You can safely tack on Spokane, WA's Fumes to that coveted list.  Helmed by one Dee Farmin and spanning the better part of the Clinton-era, The Fumes played up dysfunctional, blue-collar motifs without over-exaggerating them, and spawned three brutally scalding albums in the process: Knock Out the Axis in 1993, Self-Appointed Guardian of the Machine from '96 and Pure Bad Luck arriving two years later.  The brunt of their most crucial recordings are enshrined in that trifecta of barnburning platters, but I'll be damned if their bevy of 7" eps didn't offer some equally potent scorchers as well.  This nifty assemblege of (mostly) non-LP tracks has been a long time coming, and I could kick myself for not relaying them earlier. 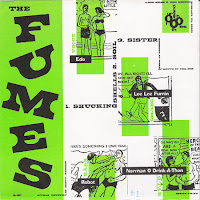 Chronologically ordered, these eighteen numbers chart the Fumes progression from garage hooligans to booze laden speed-demons, who never got their due at any period during their tenure.  And speaking of libations, like fine wine the Fumes improved as they aged, becoming all the more assaulting, not to mention downright fun.  That being said, their later singles were the most convincing, as exemplified by the barreling energy exuded on "Soil," "Flamethrower" and "Depression."  I might also offer that if you've got a hankering for the Dwarves, the sixteen-second  "Sister" could easily pass for a Blood, Guts & Pussy outtake.  Now that takes talent.  The fellas close things out with a faithful rendition of AC/DC's "Kicked in the Teeth Again." This compilation is a good indoctrination into the world of the Fumes, but their aforementioned albums are essential (and most likely available for dirt cheap on Amazon and Half.com).  You can download the Self- Appointed Guardian... disk here. After the group disbanded, Dee parlayed his luck into the none-too-dissimilar Dee Farmin Army, though I'm unclear if they had any proper releases to speak of. 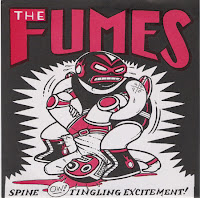 hey i got a request...how's about some Gaunt...if you have it...in tribute to Jerry Wick, gone 10 years ago tomorrow...

Damn, I guess that would have made more sense. I have a bunch of Gaunt singles but they have yet to be digitized. I'll see what I can do.

Nice post, Nice to see someone post The Fumes. The Fumes, and Gaunt were both underated bands.Thanks!

young moss tongue posted some great stuff today...including a 2-CD rarities and live collection the band created and distributed for free...it's raw as hell but it's great, and worth the 214 MBs of disk space!

Well crud. Any hope for a re-up on this batch o' singles?