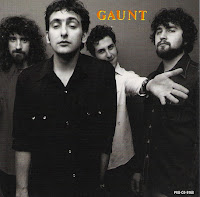 It was pointed out to me by one of my readers that today marks the tenth anniversary of the death of Gaunt lead singer and focal point Jerry Wick.  In a moment I'll address more specifically the music that I'm sharing today, but I thought I would first offer these thoughts.  Like most astute Gaunt listeners who lived outside the band's Columbus, OH radius, I became acquainted with the quartet not through their initial volley of locally issued singles, rather the Sob Story ep and the band's first official long player I Can See Your Mom From Here, and from that point I never lost a shred of interest in them.  Bratty and raw, but insightful and relatively tuneful, Gaunt possessed the kind of chemistry (at least on vinyl) that any aspiring punk band would be thrilled to use as a template.  Sonically they were a bristling cauldron of ferocity, angst and volume that was wholly indigenous, yet free of any esoteric indulgences.  On stage they were even more explosive than on tape, and the culmination of any given performance resonated far beyond the temporary case of tinnitus they were so adept at inflicting.

I saw Gaunt twice, and though I had ample opportunity to introduce myself to the band, I passed.  Never had a conversation with Jerry, or so much as submitted a fan letter.  No drooling fanboy adoration here, just a sincere respect for the group's music and down to earth ethos.  Nevertheless, when I learned on January 11, 2001 that he was the victim of a hit and run accident while bicycling home in the small hours of the night before, I was instantly dumbstruck and gutted.  I was the one that broke the news to a number of my friends, mostly via email.  I recall getting home from work that night and scouring the web for any more info on the circumstances of his death, looking for a 'chatroom' or a 'thread' where I could share my thoughts.  I did find a site where I was able to leave condolences for his family, and I left it at that.

To the credit of his surviving bandmates, they've had the decency and integrity not to cash-in on his passing with posthumous albums, dvds and so forth, though any Wick related material left in the vaults would be a welcome noise to my ears.  It was my understanding that Gaunt had already parted ways after their third album and major label bow, Bricks and Blackouts failed to catch fire in the post-grunge/nu-metal ether of it's era.  I've read from multiple sources that Wick was dissatisfied with the production of the album, and was still smarting from the experience two years on.  At any rate, Gaunt left behind a robust recorded legacy - and an almost entirely respectable one at that, even if there were few Gaunt converts after the fact.

I have about five or six Gaunt singles to compile digitally at some point.  In fact, someone already did, but the audio quality IMO is sub-par.  Instead, I'm sharing four rare Gaunt songs the band posted on their Myspace page in 2006.  Additionally, I'm also including a Bricks and Blackouts-era promo ep containing a demo version of "Maybe in the Next World," and the slow lament, "The Last Waltz," a session outtake.   BTW, there first ep, Whitey the Man has long been available on Wilfully Obscure.

thanks for your post about this great, underrated fellow! i posted the link to the rarities collection because, well, it came from the band--and because it's the best we're gonna get for now, until you update it!

i would encourage your readers to check out that collection, because Gaunt were as you so eloquently described them. and yeah,I'd like to have clean-sounding versions of the songs on that collection, but yet, the scratchy vinyl and the hiss seems apt, especially considering the loud, raw, and raunchy and primal nature of their music. and the live shows on disc two are raw and raunchy...just like Gaunt was live.

also, have you posted the 90s comp "I Stayed Up All Night Listening to Records?" because there's a rare Jerry Wick solo recording on that, "Love, Death + Photosynthesis" that is worth seeking out, kinda Tobin Sprout-like...

Thanks J. I heard the Jerry Wick song you mentioned shortly after he died, and the lyrics are if anything else prophetic. Excellent song though. Makes me wish there was more where that came from...and perhaps there is...

Like you, I was torn up when I had heard about JW. Whenever I see there LPs I buy them and hold on until I meet someone that has never heard Gaunt, I pull out the record( doesn't matter what one/depends on what I have a dbl of at the time) and I watch the music knock around in the head of the new Gaunt fan. And after Spin Class (our name for getting together a d listening to records for 8 hrs) I hand the person the Gaunt record as a parting gift. Great post. I had heard that Steve Albini did a recording of Bricks but the WB didn't dig it, any truth to that?

Undoubtedly, Gaunt remains for me, a very special band, minus the voice cast is impressive voice of Jerry and the sound of the group as particularly dirty.
Thanks for the post!!!!

Spin Class sounds like my kind of educating! Way to go for breaking in all those Gaunt fans-to-be Tony.

Just discovered this great blog-- as a big Gaunt fan (from Ohio, but moved to CA before they hit), I would love to hear these tracks. Any chance of reposting?

I'm a fan from Italy.
Best moments of my life when I was listening to their music.

I think that "week end" is one of the most beautiful punk rock song ever (covered by New bomb turks).

Thanks for your comments.

Wow! Brand new to Gaunt here, this is fantastic! Not sure how I missed these guys, because this is right in my wheelhouse. By chance did you ever get around to doing an early singles compilation? I'm about to buy all the in-print stuff. Thanks for the great blog!!

Just to follow up, you can still get: Sob Story, I Can See Your Mom From Here, and Kryptonite from the Thrill Jockey website. You can even get them on vinyl (except Sob Story) : http://www.thrilljockey.com/products/product_search?search_terms=gaunt&action_type=index

Any chance for a repost of those MySpace tracks?