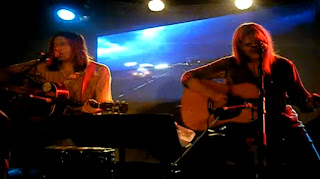 Between the Lemonheads, a Blake Babies reunion gig in 2001, and many, many solo performances, I've witnessed Evan Dando and Juliana Hatfield onstage in various incarnations roughly a dozen times, but I have yet to see them together (and frankly, if you live outside of Boston, you probably haven't either).  However late in 2010, the once romantically linked "alterna-hunk" Dando, and his on again/off again '90s collaborator Hatfield doubled up for a short run of acoustic shows in the northeast.  I didn't have the opportunity to partake in any of them, which is why I was in luck when I found this rather well recorded audience show from the Mercury Lounge in New York on the last day of September.  As was the case with many a cynical outsider at the time, the Blake Babies reunion a decade back was deemed a nostalgia cash-in.  I'm sure the this collaboration elicited a similar reaction, but for those of us who opt to prioritize the music, these shows served as a more than welcome early holiday present.

Evan and Juliana split the song quotient almost evenly here, though it's Jules who "carries" the show, so to speak, with  a more pronounced effort than her counterpart.  Both eschew a lot of obvious singles and should-have-been hits, and all the better I say, considering there's so little to argue with on this set list, which even dips into a few Blake Babies tunes, including the Earwig-era "Rain." And of course, there's the requisite banter, and a smathering of covers, like the Dead Kennedy's chestnut "Too Drunk to Fuck," and one of Evan's longtime favorites, Gram Parsons "$1000 Wedding."

thank you very much for this.

i literally have hundreds of live jh recordings from back when i used to do a lot of collecting/trading, which, as you know, isn't such a common practice anymore. not to mention, juliana's not "actively touring" anymore. however, i did attend one of these shows, and it's always nice to have a more permanent memory.

One thousand and one thanks for this.

both of these shows were fuckin great

thank you, btw. i feel like there was a dude doing a proper recording of this by the soundboard at the 2nd show. hope that turns up or gets put out one day.

Bummer, file deleted for inactivity. Would be great to get it back.

This looks great! Would appreciate a re-up when & if convenient. Many thanks for all the groovy tunes.