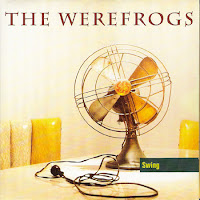 Going back aways to the summer of 2008, I shared a nice lil' slab o' wax from The Werefrogs, a downstate New York indie coconglomerate.  What I didn't realize at the time was how much more prolific a discography that had amassed throughout their early '90s tenure, the vast majority I don't have.  In addition to that aforementioned single is this nine-cut album, Swing, issued on the British Ultimate Records imprint.  It wouldn't faze me if some of their other singles and eps didn't bear some mighty succulent fruit, but it would have to stack up to Swing's most exemplary tracks, including but not limited to "Potvan," "Nixie Concussion," and "Green."  The Werefrogs seemed to occupying the same lofty airspace as post-shoegaze cases Fudge and the Drop Nineteens, and elsewhere they brought on the howling guitar melees that Pond were so effective at.  Portions of Swing kinda sag, but it's choicest offerings are downright sublime and rewarding.