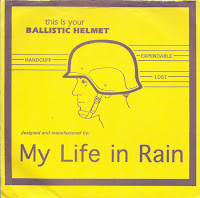 Bearing a moniker that just oozes 'emo,' My Life in Rain had always struck me as the runt of the litter of the D.C. scene.  Ultimately, this crew never quite meshed with any of the sub rosa contingents of their day, be it punk, hardcore, or again, emo.  A trio of albums were released during their mid-90s lifespan, but according to this handy discography, the single in question (produced by ex-Gray Matter/Senator Flux figurehead Geoff Turner) was their debut offering.  The three-cut ...Ballistic Helmet is a sturdy slice of hard-strummed, no frills indie-rawk, just not particularly revelatory.

A. Handcuff
B1. Exependable
B2. Lost

Glad to see there is somebody else in the world who bothered to listen to these guys. Also nice to see your writeups on Monsterland.