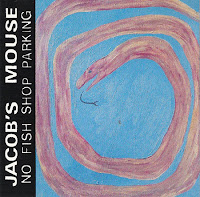 Jacob's Mouse were a raucous, noisenik contingent hailing from the boondocks of Britain who largely went unnoticed, or to put it in more colorful terms were metaphorically trampled by all the Madchester, shoegaze, and Brit-pop trend-hoppers who were making a headlong dive for Glastonbury and Reading mosh pits.  The grunge grunion of the era might have taken to this flailing trio had they been more melodically, or more bluntly, musically inclined. "Twist" is the choicest morsel No Fish Shop Parking has to offer, with it's bruising, angular slide guitar riff, not to mention something resembling a damn decent hook.  Bootstrap blog claims this ranks with The Pixies, but surely that's a bit of a stretch, albeit a vaguely similar aesthetic.  There was a follow-up album, I'm Scared, as well as some singles and other short form offerings, but Jacob's Mouse failed to generate a buzz in the States and seemingly sputtered out altogether by the mid-90s.  The US reissue of Fish Shop... tacks on two bonus tracks.  You can partake in some further opining of the band here and here, plus they're posthumously Myspace friendly.

I've opted not to share this anymore, as NFSP (the original eight-song version) is now available for purchase on Bandcamp, as is their first EP.
Posted by spavid at 6:41 PM

Weirdly, the odd singles of which you speak were, to my mind, a lot lot better that 'NoFish Shop..." - there's a few of them on YouTube - 'solo' / 'coalmine dig' / 'sagbag' and a few others capturing a weird kind of retarded P.I.L vibe that definitely has something.