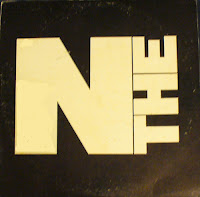 It turns out that I've had a record in my possession for some five years that just fetched over $150 on Ebay, namely this one, by the curiously dubbed The N.  I think I scored my copy on Ebay as well, though at a much more affordable fee.  Problem is, my copy wouldn't be valued nearly as much, because a) $150 would be much wisely spent elsewhere, b) no one else would be batshit crazy enough to wager that kind of coin again, and c) the sleeve is in atrocious condition.  In fact, sharing a presentable pic of it on this blog alone required some Photoshop handiwork.  With that out of the way, on their six-song 10" ep released on the Kentucky based "Hit-a-Note imprint, The N try out several flavors of post-punk rock, including an acute stab at power pop in the form of the lead-off "Leave Me Crying."  "Go To Work" has the fingerprints of Gang of Four's skeletal funk all over it, delivered in yankee fashion I might add, while the chorus of "Teenage Subversives" hints at the chimey pop that contemporaries the dB's had recently made their calling card.  Best of all, you can listen to it cost free in perpetuity, so stuff that $150 back into the cookie jar and pass me an Oreo.

Great commentary. Must be fun to shop for this stuff on Ebay. Appreciate you sharing!

Any idea if this is the same The N that did the theme song to "Earth Girls Are Easy"?

Hey, any chance of a re-up? Very curious about this!

Great blog by the way