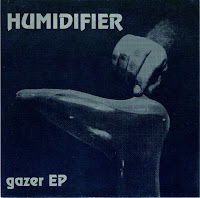 When Humidifier's Gazer ep (and to significantly wider visibility, their 1997 album Nothing Changes) made it onto the radar of indie rock geeks like yours truly, the popular misconception was that since the band's lineup featured bassist Jim Wilbur of Superchunk, Humidifier were naturally an offshoot of the now veteran Chapel Hill quartet.  Not so.  In fact, Humidifier pre-dated the Chunk by at least a couple of years, and put their roots down in Connecticut, not the Tar Heel state.  Gazer was released in '93, two years after Wilbur teamed up with Mac McCaughan and Co., but the fact that Humidifier bore a considerable resemblance to that quartets scrappy, mid-fi recording aesthetic didn't hurt in marketing the record.  Recorded in 1991, the Humidifier lineup consisted of Wilbur on bass, Denis Savkiner on percussion, John King on lead vox and guitar, and Annie Hayden on backing vocals.  King and Hayden would further their indie credentials in Spent, who would issue two full lengths on Merge, among some other short-form releases.

A six-piece serving of noise-pop manna, Gazer's conciseness isn't merely economical, it's damn near dizzying to boot, with the tuneful romantic quandary "Nicotine" being it's most notable moment, chockablock with a rock-solid hook, and as you might guess, numerous smoking metaphors.  There's a fairly exhaustive Humidifier fanpage with audio content that you can browse to your heart's content, and check out the link to Nothing Changes above for further enlightenment.

Congratulations for your blog,it´s marvellous¡Firstly,sorry for my english,i´m spanish and i´d like to ask you if you own some live song or video of a band called Boat of(another previous names were nest(adj) or pre-cave;whose members were Michael Stipe,Mike Green(ex-the Fans-Alanta pop avant group),Carol Levy and Tom Smith.The played fora fewgigs in the early 80´s in Athens.I´m very interested .Thanks a lot, although you can´t get it;if you like to contact me this is my blog:
http://wordsmusicbluespop.blogspot.com/.
Ciao

No, I am afraid I have nothing by Boat. I would assume if someone had anything by them it would have surfaced by now. Sorry!

Great post! Have you heard their MISERY'S REDEEMING LP? I think that thing is top notch pop punk/power pop rock! In 1998 I was in a book/record store in Jersey City and found it for $1 mixed in with Journey and Supertramp records.

Holy cow, that's what a call a find! I don't have an original copy of it, just a cd-r. Maybe I can post that later.

I wanted to comment on this sweet indie gem, and inadvertently put it in another post, I love this sort of stuff. More of this kinda indie rawk would suffice something fierce.

Hoping this one will make the next round of restorations as the 'best of' mix made me a Humidifier fan...

please, re-up. thanks a lot in advance!

I've had this record for years, but never had a decent way to rip it. Just randomly googled it and found that not only had you upped it, but you just refreshed the link 2 days ago! What luck! Thanks so much.


Hi fellas,
Thank you so much for this wonderful article really!
If someone want to read more about that Humidifier I think this is the right place for you!

These are some of the major causes of bad indoor air quality. And all that's written here is necessary for better home health. Heating and Cooling Toronto

I got to know a lot more about water heater efficiency and preference here. Thanks for such an amazing article.