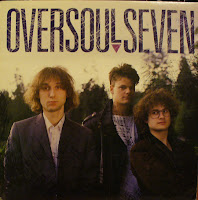 Oversoul Seven were an export of Vancouver, BC, Canada, who seemed to be angling towards the left end of the dial (and probably could have were they a bit more savvy), but strayed a few notches shy.  More "modern rock" than "indie" if you get my drift.  This trio weren't nearly as distinguishable as I had hoped to encounter, though ringleader Adam Gejdos vaguely resembles Cactus World News frontman Frank Kearns, vocally that is, but it's improbable that one was ever aware of the other.   The clangy "How Many Times" has some real spark to it.  As for the rest of Oversoul Seven, do things catch fire elsewhere?  Guess there's only way for you to find out.  The band released an ep, Fool Revelation, a year prior to this that I hope to get my hands on soon.

On a sadder note, bassist Len Morgan (the one in glasses) passed away in 1993 at the tender age of 27.

Yes. Thank You! Oversoul 7 is a hard band to track down... i have the EP, except it is so scratched from playing that it's unplayable. i had this album, not sure where it is now - some great memories attached to these songs. an old old old band i was in opened for Oversoul 7 at the railway club for shindig - a contest that Oversoul 7 won, and the prize was recording time - which they used for that first EP... my band lost... but it was worth it.

Funny, I just pulled out the Fools Revelation ep a couple of days ago because I was thinking about Len.

Thx. I really enjoy the regional stuff you have.