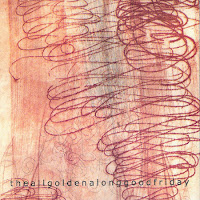 It's a damn shame this Buckeye State crew has ostensibly thrown in the towel, 'cos boy, The All Golden knew how to start an album off with a bang!  The leadoff "Your Bad Wires" is an absolutely exhilarating rush that surges and swells on the crest of some very prominent and chilly synth manipulations, recalling the most visceral work of the Wrens, and to a lesser extent Death Cab.  Near-mindblowing, I tell ya, as is track three "Velikovsky," which revels in a like-minded, dense deluge of sonic glory, packing another stupefyingly killer hook into the mix.  From that point on, A Long Good Friday's quality control isn't as stringent, though you'll still be compelled to stick around for the rest of the show which veers from state-of-the-art indie rock a la aughts-era Guided By Voices, to honey-dipped (though not heavy handed) psych-pop, not far removed from say, the High Dials.

The aforementioned "Velikovsky" was also released as a single contemporary to the album, and as luck would have it, I already dedicated an entry to it in the fall of '08.

I've actually heard one of their albums before, but had no idea they had a connection to the All Golden. Thanks.

The music of The All Golden was very influential in making Out of Place, an award winning film about surfing in Cleveland, Ohio. You'll hear The All Golden and Celebrity Pilots on the soundtrack. Check it at www.outofplacemovie.com.

Hi, please could you re-upload this? Rapidshare's done its usual deletion thing... Many thanks!

hey there, we're releasing a new record this month, 'and faraway is scotland' on our microtone records imprint.
best,
chris sheehan