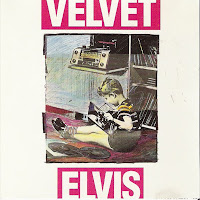 Received a couple requests for this album since I posted a less well known anthology of Velvet Elvis' earlier material before they made the jump to Enigma. Per the intro to that previous feature I did:


Lexington, KY's Velvet Elvis were one of a bazillion college-radio bands in the '80s to record for local record labels despite brandishing the quality befitting of a national, or for that matter international audience. Think "indie," "New South," dB's, Let's Active (who's Mitch Easter contributes on a track here), and even a little Tom Petty-esque jangle.


Several songs from their debut LP, What in the World turn up here in revised versions, all produced and tracked under the watchful eye of one Mitch Easter. Now if that's not a trademark of quality, I sure in hell don't know what else is.
01. When it Comes
02. I Got Everything
03. Privilege
04. This Could Be
05. Something Better
06. Something Happened Today
07. Ambition
08. Take It If You Want It
09. What in the World
10. Second Best
11. Don't Tell Me Stories
12. Over and Out
https://www41.zippyshare.com/v/5nzV6h4h/file.html
Posted by spavid at 5:48 PM

Greetings, I'd like to make a request and I'm not sure if this is the right place but anyhow. I just discovered a band called The Flys and their song Got You Where I want You. I've searched and haven't found it yet. I don't suppose you can point me in the right direction?

I've noticed you've posted some Aussie bands lately.
Have you heard of...
You Am I
The Crystal Set
Porcelain Bus
The Sunny Boys
Radio Birdman
The Moffs
The Stems/Someloves/DM3
Screaming Tribesmen
The Eastern Dark
The Trilobites
Spy v Spy
The Numbers
Love your blog and discovering unknown bands (to me that is)

Will try to get to some of these piratecyan. I know a Numbers CD anthology was released a couple of years, which is actually pretty killer. Not familiar with the Flys or that song. Sorry!

thanks, can't wait to hear this as i loved the previous velvet elvis post!!

Hey Spavid, Is this your blog?
Regarding the Aussie bands I listed, I have a lot their stuff. I was just curiuos if you had heard of any of them thats all, seeing how you knew about Pollyanna and Mad Turks and Glide etc. It always surprises me where people have heard of our obscure bands.
I have both the Numbers original LP's too and a couple of only 7 inch releases too. Saw them live before their first album by accident where they did Cheap Trick covers amongst others. It was a top night and me and a mate drank the bar dry, or seemed to lmao.

Any chance of getting this download link re-posted? It has been removed due to lack of activity.

Could you repost this album, please?

Any chance you still have this one?

Can you repost this please?