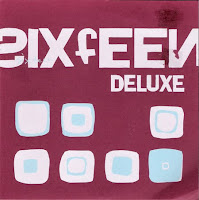 Austin's Sixteen Deluxe were a coed indie quartet with a decent local following, but despite signing to Warner Brothers in the late '90s for their sophomore album Emits Showers of Sparks, they never translated to a nationwide audience. Their zesty stripe of guitar-pop will appeal to those appreciating the sonic sprawl of Silversun Pickups, with a distortion-inflected wink and a nod to such female fronted alt-rawkers as Magnapop and the Primitives. I believe "To Find What's Waitin' For" was rerecorded for their 2000 album, Vision Take Me Make Me Never Forsake Me, while the sharp-as-a-tack flipside, "Burning Leaves" is proprietary to this single.

A. To Find What's Waitin' For
B. Burning Leaves

didja know they recently got back together? Played at SXSW, apparently a new album is possible...

oh and they have a new record out, called "Year One"

I heard something about a reunion but had no idea about a new album. Thanks for the update.

hey do you happen to have the "Reactive" single, or the Cincos Anos comp?

Hello again,
can you please, also repost, this 7''?
Thank you very much
Stathis