Dewey Defeats Truman - The Road to Nowhere Maps ep (2002, Has Anyone Ever Told You?) 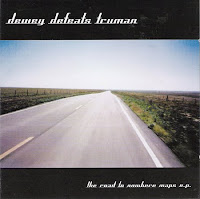 Dewey Defeats Truman were a great and probably now defunct San Diego band whose records not only got lost in the shuffle generally speaking, but amidst my only personal collection as well. In fact, this vivacious indie-rock threesome are right on par with the most capable work of likeminded combos The Promise Ring, No Knife, Skiploader, and Not Rebecca. So why haven't I graciously waxed on DDT previously? In a word, visibility. Were it not for the music rag I wrote for at the time (and thankfully, continue to do so), I would likely have been ignorant to them altogether. Given my overwhelming stash of cds and vinyl, these guys unfortunately tend to garner minimal play at my house/in my car/on my MP3 player, but it's due to no deficit of talent on their part. Hopefully you'll be able to to give this ep the TLC and attention it deserves. Here's the review I penned for Big Takeover magazine:

To say we haven’t had an overabundance of indie-guitar rock bands over the past years would be like saying Enron has a dearth of paper shredders. Yet just when you’ve sworn this kind of stuff off, Dewey Defeats Truman are likely to reel you back in. Their cleverly (and confusingly) titled debut mini-album B-sides, Rarities and Outtakes, played out like a warm-up compared to this scintillating EP, which find this San Diego trio in a better place, effortlessly whipping out fevered, jangle rock numbers like “Sound Surrounds,” and “Damaged Goods,” without being overtly melodramatic (i.e. “emo”). Fans of Lotion, Not Rebecca and Jebediah should make a beeline for this.

The disk B-sides, Rarities and Outtakes, I referenced above is just as recommenable as this ep, and may still be available at a reasonable fee from Silver Girl Records.

I had forgotten about Silver Girl records... I guess that goes with the theme of your post though!

I put this out my label. I don't listen to it much either, but it's a great little ep and I always enjoyed it quite a bit. Chris

Anybody know what happened to these guys? I actually bought this EP and that was saying a lot in 2002.