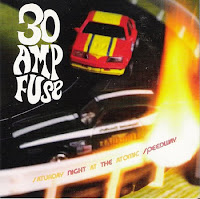 Thought this would be appropriate in following up my Punch Wagon post from yesterday. I name-dropped a chap by the name of Mike Smithers, who played bass in that short lived John Davis fronted trio. From what I can tell, he never migrated to any of the various Superdrag lineups, but he did go onto 30 Amp Fuse, a rather vigorous, rip-roaring punk-pop crew who released three albums during the late '90s, Saturday Night... being the first. If you're familiar with some of Superdrag's faster numbers (e.g. "Slow to Anger," the gale force opening salvo from Industry Giants) that should give you a rough idea of what 30 Amp has in store. Additionally, this disk was produced by none other than Bill Stevenson and Stephen Egerton of Descendents/All acclaim, so that should provide you with yet another hint. Killer stuff.


Incidentally, John Davis is briefly reunited with his aforementioned Punch Wagon alum, Mike Smithers on track 4, "I Fall Down." And speaking of reunions, 30 Amp Fuse are gearing up to come out of retirement and play a show on July 9 at Barley's Taproom in Knoxville, TN, with Davis in tow.

i still have this on my shelf. i liked "Tilt A Whirl," and other times when the band was at their punkiest.

I remember listening to this album as a kid when the internet when streaming music was like, what the fuck is that?

Loved it thanks for uploading. Wish I'd seen these guys. Maybe i'll have to head down to their town and catch a gig.