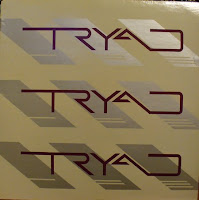 As long as this blog is in operation we'll continue to celebrate bygone bands that by virtue of their vintage expiration date, managed to fly well under the radar of Google. I give to you Chino, CA's Tryad a rather arcane band who slide straight into our rarified obscuro realm. Recorded only ten weeks into their tenure, it's not specifically evident on On Call what would become of Tryad past this nascent album. Ten songs banged out in approximately 23 minutes with nary a power chord, mohawk, or any like-minded cliche in sight. Truth is, this trio played it relatively straight down the middle, but not without igniting a few firecrackers in the guise of their lead-off pitch "Call Me Back," and a few songs later, "Don't Blink," both of which sound like lost AOR/power-pop classics. Here are some liner notes taken from the lyric sheet:


You may wonder why a virtually unknown band from Chino California would record their first album after performing together for only 10 weeks. Simple. From the very beginning of Tryad’s conception their versatile style promised to be ever changing and unpredictable.

On Call attempts to capture that initial burst of contagious harmony and elusive raw talent that demanded so much attention so soon in their careers. Listen to the words. Feel their spirited energy. The album is a song itself.

Hi there,do you have a new link for the album.

Can you re-up this album please? Thanks in advance. :)