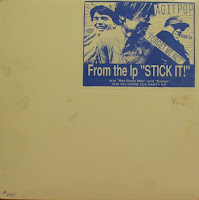 It's about time I got around to doing a post on the humble Poughkeepsie, NY trio known as Agitpop, and from what I can surmise, this might be the only chunk of cyberspace I'll ever dedicate to them, as their back catalog is back in circulation, at least digitally. The Agits were one of the quirkier acts on the Twin/Tone Records roster, and an acquired taste at that. The loosest comparison I can conjure up is fIREHOSE. Like Mike Watt and Co, these crafty downstate New Yorkers offered agile playing chops within a mildly, jazz-informed post-punk construct. Mouthpiece John DeVries does not possess the sweetest set of lungs, but his scratchy timbre suits the band's unique modus operandi just fine. This promo-only ep coincided with their fourth album, Stick It! The a-side, "Forget Me Not" is a comparatively mellow LP cut, while the other side of the Frisbee offers two exclusive covers, both undeniable classics - Gang of Four's Entertainment! scorcher "Not Great Men," and Cream's bittersweet "Badge." Stick It! is still available from Twin/Tone (only on burned CD to my chagrin, but better than nothing) as well as the preceding Open Seasons album. Two earlier Agits albums, Feast of the Sunfish and Back at the Plain of Jars can be snatched up on iTunes and Emusic. Agitpop's Myspace page has info on some recently recorded material, though it's not entirely clear if it's for sale yet. Some new songs are up at any rate. Finally, Trouser Press has a few things to say about the trio's discography. Enjoy (or not).

Great add! Have you ever run into "I Stole Your Girl Away" by Grass-Show?