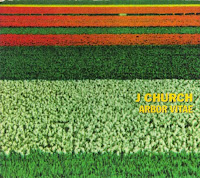 J Church's fruitful and prolific run by and large peaked at the time of Arbor Vitae's release in 1995. Produced by Frankie Stubbs of Leatherface renown, it was their third LP overall, and the first to be issued on the band's (i.e. singer/guitarist/visionary/ex-Cringer frontman/sole continuous member, Lance Hahn's) in-house label, Honey Bear Records. It spawned two singles, "Your Shirt," and "Racked," though neither made it anywhere near a Billboard chart. Arbor Vitae is one of their finest albums, and overall definitively representative of what they had to offer. A virtual pop-punk entity unto himself, Lance intermingled the maelstrom of late-era Husker Du, with a thoughtful, twenty-something songwriting aptitude that was at once easily relatable but in no small way profound. His was a truly singular voice, tragically silenced in 2007 due to complications with kidney disease. Literally dozens and dozens of records were released during his nearly two decade long tenure Click on the first hyperlink above to find out all you need to know regarding Lance Hahn and his rotating roster of pals and gals collectively and fondly known as J Church.

These so-called British albums (see also "Cat Food") with those Heavenly backing vocals are some of the best parts of the incomprehensibly mammoth J Church discography.

You should check out 2000's One Mississippi. Powerful!

This is my all-time favorite album of theirs. Thanks for sharing - I lost my original CD rip in a hard drive crash!

hey, can you re up the files please?