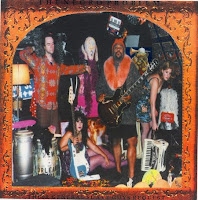 Before I proceed, try not to get too weirded out by this outfit’s seemingly outrageous moniker. The Negro Problem are not only more than ethnically friendly, frontman Stew (Mark Stewart) is African American. In fact, my only reservation in sharing this very hard to find three 7” box set is the frustrating amount of vinyl static that populates some of these songs. Released in 1996 via Pronto Records, the same label that put out a similar 7” box for the Sugarplastic (and from what I understand Possum Dixon), Their General Suave Guys Request features early incarnations of songs that would be reworked for their masterful debut LP, Post Minstrel Syndrome, one of the signgle most dazzlingly sophisticated post-power pop records of the 1990s.


In the world of TNP, arresting wordplay, surrealism, and an avalanche of hooks to die for often dovetail with none-too-obfuscated social commentary, but when all is said and done it's Stew's incredible set of lungs that define the band in a most sublime way. If you're at all impressed with you hear, Post Minstrel... is an absolute must, and TNP's followup, 1999's Joys and Concerns is nearly as crucial. In 2002, a third TNP album, Welcome Black, was released and throughout the '00s Stew would pen several solo albums, Guest Host being my favorite. In recent years Stew has followed theatrical pursuits, quite successfully I might add.

Great upload. I'll check out the files and listen to the pops and clicks. I've got the vinyl myself and if my originals are better, I'll rip them and send them on over to you.

Thanks Kouzie! The first two tracks are especially static-laden. Would love to see a CD reissue of this, but something tells me Stew has bigger priorities these days.

A serious family issue made me miss "Passing Strange," Stew's Broadway show. I was pleased to find out it's on PBS as part of Great Performances (directed by Spike Lee) and I would expect on DVD.

Anyway, thanks for posting this.

Static or whatever, I'm grateful to be alerted to the existence of this. I've been following Stew since the NP debut, and it's nice to see the guy enjoying so much success.

I am enjoying this a lot. Thanks for sharing. Spavid, have you heard of danish band Oh No Ono? I think you might enjoy it.

Hi, is it posible to re-up, please?