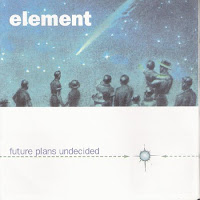 Falling somewhere between an unassuming, bubblegum-punk album and a mini-masterpiece, Element 101's 1999 debut, Future Plans Undecided has been an indispensable part of my soundtrack for the better part of a decade. Led by the honey-soaked tongue of Crissie Verhagen (now Crissie Gleason), this defunct Verona, NJ (or thereabouts) quintet made it onto my radar with their subsequent 2001 LP, Stereo Girl via the catchy-as-all-get-out "To Whom It May Concern." I was motivated enough to do a little backtracking, and discovered Future Plans... a couple years after the fact. The album originally came to light on Burnt Toast Records when the group was simply going by the moniker "Element." Tooth & Nail Records bought the rights to Future Plans... a number of months later, reissued it with refurbished artwork, administered a slightly different track sequence, and a new remix that was so negligible it's nearly impossible to detect the differences between either incarnation. By the time Tooth & Nail sank their proverbial claws into the record, the band expanded their name to Element 101, most likely to differentiate themselves from a myriad of other bands named Element. I've decided to share the original version, if only by virtue of it's sheer unavailability. Now that we've gotten all the mechanics out of the way...

If saccharine is your thing, the quotient thereof on these twelve cuts will almost certainly send you into sugar shock. Future Plans is positively drowning in an ocean of delirious melody and harmony, the likes of which you probably haven't heard within the span of a fleeting half hour. I've never encountered another singer who doles out hooks quite as unremittingly as Crissie. There's no denying it, she makes this album the sparkling and bejeweled treasure trove that it is. Crissie is backed up by a crew of four boys who often deliver their parts at such breakneck speed that one would mistake the pummeling guitar lines for any given NOFX album, yet this seemingly awkward dichotomy somehow falls into place. Thematically, Future Plans is perhaps one of the most straightforward albums in my collection. Nothing oblique or esoteric here in the least, rather a plethora of post-adolescent ruminations from a young women crossing the threshold of maturity, but still quite vulnerable to romantic turbulence. Lots of self-realization at play here as well, best emoted on "So Unpredictable," and "A Galaxy Apart." "Preconceived Notions" and "Jersey Never Seemed So Long" are worth their weight in hook-addled gold as well, the latter being an essential part of any Garden State roadtrip soundtrack. I apologize in advance for glowing so conspicuously about this disk, and while there are plenty of albums I've shared on here that outdo this one, I've forged an affinity with Future Plans Undecided like no other. In closing, it would probably be fair to say this album made a bigger impression on me than it's very own architects. That's pretty nuts, but a must listen nonetheless.

01. Between Now And Then
02. A Galaxy Apart
03. In My Heart and on My Mind
04. Leaving Me Before The Spring Semester
05. So Unpredictable
06. Keeping Secrets
07. Jersey Never Seemed So Long
08. Preconceived Notions
09. Some Things Are Better Left Unsaid
10. Only in Pictures
11. Some Chances Are Worth Taking
12. You Never Cease to Amaze Me

i love this record! although i don't have much to add, i basically like it for all the same reasons you stated.

i do think that in terms of other similar music out there, although asobi seksu is more on the shoegaze/dreampop tip, i could imagine them recording something not too far off from this, but i guess that's neither here nor there.

also many thanks for sharing the burnt toast records version. i was aware its existence, but like you said, it's pretty much impossible to track down. meanwhile the tooth & nail version seems to be in .99 bins everywhere.

anyway, thanks again, love the blog!