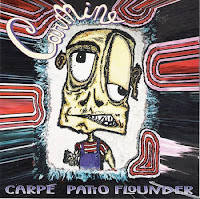 Even though these somewhat non-descript, post-grunge schleps from Atlanta, GA didn't make music that was quite worth writing home about, Carpe Patio Flounder's inclusion on this blog was inevitable if only for it's centerpiece, "Mitch." Who would have guessed that such an unassuming paean to a found pet turtle would be so terrifically endearing, not to mention anthemic? Well, at least to this set of ears, Carmine penned an alt-rock ditty for the ages. The trio's net presence is less than ubiquitous (with perhaps only this 1996 article providing a few pertinent clues written after the band had relocated to Seattle), but after engaging in some brief Latin translation, the album's moniker roughly means "seize the suffering fish." And speaking of suffering, this disk has it's share of clunkers, some goofy ones at that, but in addition to the aforementioned "Mitch," the boys also go a long way in redeeming themselves with the hooky, riff-addled ""Your Biggest Fan," and "I Relate," a sincere and tuneful stab at balladry (or reasonable facsimile thereof). By pure coincidence, frontman Jeffrey Barnes recalls the golden throat of Meices/All Systems Go head honcho Joe Reineke and that guy from Love Battery.

This is really good.

I bought this at a dollar store in like fifth grade. I still have it. It is awesome.

I bought this at a dollar store in like fifth grade. I still have it. It is awesome.