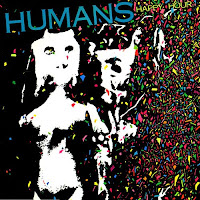 With a band name that acknowledges a concept as lofty as our very species, you might expect a grandiose gesture or two from the Santa Cruz based Humans. Not so. In fact, this long defunct five-man troupe resided on the blunter side of the cutting edge, but not without packing some bite on such standout selections as “Lightning,” “Don’t Be Afraid of the Dark,” and “You Don’t Wanna Know.” The Humans opted to lick at the fringes of the early ’80s new-wave movement without jumping into the fray full bore, and as such they weren’t particularly distinguishable from many of their likeminded hopefuls. Even so, you’d swear that some of the aforementioned titles on Happy Hour were somehow quintessential of the era. Not a bad effort, save for the artsy closer, “Obituary” that draws the album to a rather unraveling coda. Apologies in advance for all the annoying pops and surface noise.

It's great, but the link is dead.
May you re-upload it, mate?

thank you for your amazing blog! if you ever get a chance to re up HUMANS "Happy Hour" - I would be so grateful!

Massive thanks for this gem!