Well before Merge Records became the tastemakers they are today, jettisoning much of it's roster into the Top-10 Billboard album chart and whatnot, the label's pre-2K era reputation hinged on such comparative heavy hitters as Superchunk (the house band for those of you not in the know), that band's associated offshoots like Portastatic, as well as unrelated acts like Polvo, the Magnetic Fields, and Neutral Milk Hotel. During the '90s Merge would release a one off single by virtually unknown acts, (many of whom would sadly remain as such) including Richmond, Virginia's Dynamic Truths, an offshoot of some slightly more prominent area forerunners, specifically Coral, Honor Role, and Fudge. I shared DT's lone Merge Records entry two years ago, a 1998 single which was never followed up by a full-length until a good twelve years or so after the fact. Enter 2010 and a fifteen song assemblage of the group's recorded legacy, Understanding is Overrated, released in a scant quantity of *gulp* 250 copies, and available 'til it's slim supply runs out from Merge. 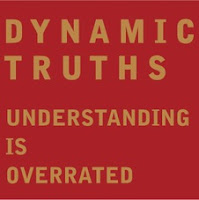 Featuring both songs from that aforementioned gem of a single, with it's remaining thirteen selections being culled from 1996-99 recording sessions, Understanding is Overrated hones in on DT stitching together the dissonant, noisenik maneuvers of it's antecedent groups (particularly Coral and Honor Roll) with a heightened tunefulness that wandered into the environs of Portastatic, Sonic Youth, Mission of Burma, and the Verlaines to name a few. Something of a perfect indie-rock storm if you will.  I would encourage you to make a beeline to Merge's online retail outlet if you don't want to miss out on this one.
Posted by spavid at 4:11 PM

Thank you so much for writing about our release! Just one more note - there will an even smaller run of LPs (100!) that come with a CD. They should be done in a month or so. Merge will have those too and for stores looking to buy them, the Independent Label Collective will be taking care of distribution.