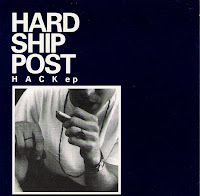 They hailed from the hotbed of Halifax, Nova Scotia, released records on Sloan's Murder Records label, and even had a full-length on Sub Pop, yet the Hardship Post played second-fiddle to many of their hometown brethren. The band's catalog has seemingly gone uninvestigated, so I thought I'd give a little exposure to a couple of their strongest releases.


With a penchant for throaty, minor-key melodies, buttressed by a robust and driving rhythm section, The Hardship Post's indigenous brand of fuzz-laden indie rock delivers some stunning moments on the all too brief Hack ep. Last year, I posted Trim Crusts if Desired, a compilation on the now defunct Cinnamon Toast featuring what I consider to be this trio's crowning achievement "Wont You Come Home?" The six songs on the ep are definitely in the same mold. Shortly following up Hack was a two song single on Murder Records, titled Why Don't You and I Smooth Things Over, though neither of the tunes share the record's title. The foil cover doesn't translate well from my scanner. My apologies.


Somebody Spoke, their Sub Pop released album, didn't quite live up to Hack's bountiful promise, but is still worth a listen if you this upload pushes the right buttons. Prior to both of the Murder Records releases the Hardship Post made their debut via a grungy lil' two-song 45 on Mag Wheel Records, which might still be available from the label.

Why Don't You and I Smooth Things Over 7"
A. Silver Suit
B. Under the Influence of Meat Puppets II

Slight correction - Hardship Post were originally from St. John's, Newfoundland, the easternmost tip of Canada. After a year or so, they moved to Halifax as that was where the action was.

Here's an early song from them...
Tables and Chairs Upside Down

Hey this was one of my favourite tapes back in the day. I still have the cassette, but no way to rip it. Any chance you could repost it?

I have the single, and will rip it soon.

I also have the split single with Randy Bachman, if you're missing that one. It's excellent.

Anyone know what these guys are doing these days individually?

Thanks so much for this and the Cinnamon Toast sampler! The Hack EP link still works, but the 7" link is dead. I'd be interested in it, if you don't mind uploading it again.