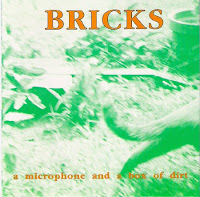 As with many, if not all of Mac McCaughan's pre-Superchunk endeavors discussed heretofore, I have limited historical data to embellish the music I'm sharing. Bricks are a different kettle of fish, in that the majority of their recorded output had been made available on compact disk for many years. The now *technically* out-of-print disk in question is titled A Microphone and a Box of Dirt, which I'll address more specifically in a few moments.

The three pre-Chunk outfits I've elaborated on in recent weeks, The Slushpuppies, Wwax, and Metal Pitcher, may have all been shoestring budget forays, but those aside, Bricks were tangibly, and furthermore aesthetically, the most lo-fi by far. Accompanied primarily by Max Webster, who would later pursue his music career in Tsunami, many of Bricks' tunes ring cacophonous. Chalk this up to the tinny, droney, heavy-goes-it on the treble assault that dominates Microphone's 18 recordings. Bricks bordered on the shrill (not to mention tone-deaf), but captured a purity unparalleled to anything our man recorded before or since. Sensitive eardrums may find it something of an endurance test to sit through the Bricks catalog in one session, but tackling it song-by-song, Mac's slice-of-life ruminations are rewarding and memorable given the investment - and the hooks are there if you care to excavate them. I always thought it was a damn shame that the cautionary "You Shouldn't Have Smashed Your Guitar" came 25 years or so too late for one Mr. Peter Townsend.
A Microphone compiles songs tracked between 1988-90, which had previously appeared on the Bricks Winterspring cassette, Merge singles, and compilation appearances, although it is unclear if anything was left off, that is except for two songs on a Simple Machines Records 7" release that saw the light of day in 1994. I could not in good conscience upload the CD in it's entirety, as it is available as a paid download from Merge Records. Therefore I have singled out four key songs from it, as well as the two songs from the Simple Machines 45, exclusive to that release as I just mentioned. BTW, additional contributions to the band were also offered by Laura Cantrell and Josh Phillips.
One more module to go, and Life Before Superchunk will be history...as if it isn't already.
Here comes the getting wet part...
From A Microphone and a Box of Dirt:
01. A History of Lies
02. You Shouldn't Have Smashed Your Guitar
03. Smoking Hooch With the Flume Dude
04. The Girl With the Carrot Skin
From Simple Machines Records 7"
05. Don't Hog the Nog, Zog
06. Albanian Magi
http://rapidshare.com/files/134220063/bricks.rar
Posted by spavid at 8:18 PM

I don't have the files anymore, at least not readily accessible. Will see about re-posting this later.