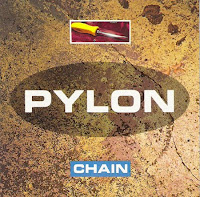 When Athens, GA’s legendary post-punks Pylon reunited for the first time in 1990 (we’re still in the midst of their second reunion, which kicked off last year) it seemed as if few ears outside of their hometown really perked up – even with a brand new Pylon album in stores. Chain was the album I’m referring to, their third overall, not counting the 1989 Hits retrospective. While it doesn’t quite scale the innovative peaks of their classic debut, the recently reissued Gyrate, Chain is a logical, if not belated, step in Pylon’s post-modern pursuits The rigidity and tension that permeated previous Pylon records was slightly curtailed, but their trademark concise and hyper-rhythmic tendencies remained entirely intact.

While not a through-and-through goldmine, “Look Alive,” “There It Is,” and the downright infectious "Sloganistic,” all earn their rightful place on any Pylon best-of mix tape. Chain’s aura indeed deviates from Gyrate, as well as 1983’s Chomp LP, but you’d swear their seven-year hiatus seemed closer to seven months. And I have to admit, the diminishment of singer Vanessa Briscoe Hay’s often grating shriek is an extremely positive development here.

In addition to the album, I’m including a two-part Pylon interview conducted with Vanessa and drummer Curtis Crowe, taken from a promo CD that was only made available to press and radio at the time of Chain’s release.

Update: Chain is now available from iTunes and Amazon Downloads, but I am preserving the interview below.

great blog!
If you like I added your link.

punks and skins united and strong!

I'm glad to see that you're sharing this one here. I've owed it since it was released, and although I was disappointed with it at first, it has grown on me through the years. The band has been playing so many dates the last few years that I'm hopeful we'll see a brand new Pylon album from them one day. Even though I've got this one, I'm downloading it anyway, for the interview, which I really appreciate. Thanks a lot.

I also feel so alive when my friends and I play the song buy viagra because it's a reality it's a serious problem many men around the world are suffering.

What does it mean if a person is a "Pylon"?
Lexington