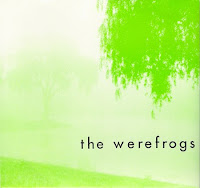 A reader recently suggested a band that he thought I'd appreciate called The Werefrogs. Crazy thing is, me being Mr Moneybag$ and all, it turns out I had purchased a Werefrogs single about a year or so ago that I had completely forgotten about, or for that matter even played to begin with it.


The Werefrogs had their day in the sun (or perhaps more appropriately, in the pond) during the late '80s/early '90s. Though they hailed from downstate New York, many of the band's records were minted on the British Ultimate Records label. Somewhat fitting, as I'm detecting trace elements of Prefab Sprout and to leaser extent, The Smiths, on this sublime single. In my opinion, the b-side "Tin the World" prevails over the flip, "It's Real." Both tracks feature some tastefully placed saxaphone, but future releases, including their 1993 Swing album, found the combo encroaching into dream-pop territory. Beautiful sleeve on this one as well.


From my understanding, The Werefrogs occasionally play reunion shows around their
native Port Chester, NY. Enjoy.
A. It's Real
B. Dim the World
https://www51.zippyshare.com/v/aN9yuTYE/file.html
Posted by spavid at 4:11 PM