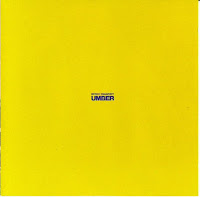 I don't know what could have possibly possessed singer Sooyoung Park to christen his influential, late '80s trio "Bitch Magnet." I also don't why their second full length, Ben Hur is ostensibly still in print, while this 18-song CD featuring their debut ep Star Booty and first LP Umber languishes out of print, with huge price tags on Amazon for used copies. Furthermore, I don't know why I was stupid enough to set up my big CD rack on a wall receiving direct sunlight for several hours a day, thus insuring all the spines of my CDs would gradually fade, including this one. What I do know, is that I am fortunate to have discovered the singular genius of Bitch Magnet, and in particular this disk, chock full of noisy feedback-ridden indie-punk.


The band's historical significance is considerable to us indie rock types. Allmusic.com lays it out better than I ever could:


Part of the extended Squirrel Bait family tree, Bitch Magnet was one of two bands that guitarist David Grubbs joined in the wake of his departure. Unlike the other one, Bastro, Grubbs wasn't a charter member of Bitch Magnet, nor was he the leader; that duty fell to bassist/vocalist Sooyoung Park. Much like Bastro, however, Bitch Magnet played a blistering and intellectual brand of post-hardcore punk, which often drew comparisons to Steve Albini's Big Black; they were also grouped with a more direct Squirrel Bait descendant, Slint, albeit more relentless and somewhat less nuanced. Sooyoung Park founded Bitch Magnet in 1986 while a student at Oberlin College in Ohio, joining with guitarist Jon Fine and drummer Orestes Delatorre (aka Orestes Morfin); despite their Oberlin roots, the trio was actually based in Chapel Hill, NC. Bitch Magnet signed with the indie label Communion and debuted in 1988 with the Star Booty 12" EP, which was produced by Steve Albini himself and earned the band some notice on the underground rock scene. For the follow-up, 1989's full-length Umber, they added second guitarist David Galt (a later CD issue appended Star Booty as well). Galt's place was taken by David Grubbs later in 1989, and Grubbs toured with the group in between commitments with Bastro. Grubbs appeared on the EP Valmead and on Bitch Magnet's final album, Ben Hur, both issued in 1990. After Bitch Magnet's breakup late that year, all four members went on to other projects: Park formed the acclaimed Seam; Grubbs returned to Bastro, which evolved into the seminal Gastr del Sol; Fine played with Vineland and Don Caballero; and Orestes Morfin resurfaced in Walt Mink.


Part of Bitch Magnet's appeal to me was the influence they had on other torchbearers, like the wholly unrelated Jawbox. To my ears, the Big Black comparisons aren't as prevalent as the Squirrel Bait ones, but given their lineage, I suppose that makes sense. The performances here bear a "distant" quality to them, almost as if the mics were positioned several feet away from their respective instruments (that or a lukewarm mix). It's hard to tell if this was purposely built-in for effect, or the product of recording constraints. Nevertheless, it doesn't stop the quite literally, revved-up "Motor" (from Umber) and "Sea of Pearls" (Star Booty) from functioning as demi-inide rock anthems. The Star Booty tracks strike me as more melodic than the full-length, and thus appeal to me more, but anyway... Now that I've rambled on this fine tuneage copiously enough, check it out for yourselves. In the folder, amidst scans of the booklet and tray card is a photograph of the sleeve of my vinyl copy of Star Booty. Enjoy

The mere mention of Squirrel Bait has got me interested in this one...

If memory serves, Bitch Magnet were named after a reference from a Big Black album. Maybe "Atomizer"?

Thanks for posting this. Brought back a lot of memories.

If there is any reason why Ben Hur is still in print, it would have to be the closing track, Crescent. One of the best songs in indie rock, hans down.

Thanks for the link Dave! Really appreciate it.

The name Bitch Magnet...well, on the back cover of the Atomizer LP, there's a facsimile of a letter from some shitty Chicago funk radio station to Dave Riley, Big Black's facially-scarred bassist. Someone has biro'd on the letter, with an arrow pointing to Riley's name...'BITCH MAGNET'. So there you go!

Between Bitch Magnet and Walt Mink Orestes played in God Rifle. You can hear some of those tunes here - http://jolt.page.us/godrifle/

Thanks so much for posting this. News that they are getting bacl together made me want to hear Star Booty again, but sadly my vinyl is long gone. I was fortunate enough to see the band live circa 1989/90 when they came to the UK and played in Birmingham. Unfortunately they were somewhat late turning up to the venue and could only play for 20 minutes because of some dumb curfew.