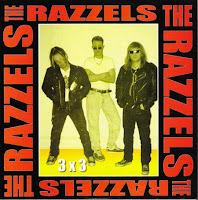 Three songs, in three chords, by three working class stiffs from Buffalo, NY with three hearts 'o gold. Although The Razzels didn't posses the charm offensive their hometown heroes The Goo Goo Dolls had cultivated by the time this wax came to light, The Goo's early albums certainly rubbed off on them. In fact, preceding this single was the Razzels' self-released CD Booger, which was produced by none other than Robby "Goo" Takac.


The Razzels were even more reminiscent of The Parasites, a band that landed a previous entry on Wilfully Obscure. Lead singer Whitey (formerly of the Spludderduds) informed me they weren't actually familiar with the Parasites, so for better or worse, it just turned out to be a happy coincidence. After two long years, the Razzels proper debut, Suck My First Impression landed in 1999 on the heels of this single, and in 2001 the trio's final album, Throttle, was released to a relatively indifferent public, even on their home turf. Little was heard from them again, but if anyone in the band is reading this, don't be a stranger.

I was The Razzels manager during the "Suck My First Impression" and "Throttle" days.