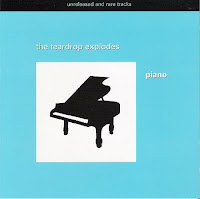 I was pretty surprised to learn that this one slipped out of print. While I probably wouldn't recommend this for neophytes, (for the uninitiated, go for the Teardrops' classiq debut Kilimanjaro, specifically the remastered 2000 reissue) however it's a must for fans, if only for the fact that none of the ten tracks within appear in these particular incarnations anywhere else on CD. The first seven songs, including the popular "Sleeping Gas," "Treason," and "Bouncing Babies" are extracted from early, independent singles. Re-recordings of these would surface on The Teardrops major label releases, but their inclusion on Piano, to a certain extent, serve as demos. All the b-sides are included too. The remaining three numbers are culled from the 1982 To the Shores of Lake Placid compilation on Zoo Records. "Take a Chance," in particular, is swirling, neo-psyche pop bliss for the ages, and it's more demure follow-up on the setlist, "When I Dream" would be reworked for Kilimanjaro.


A second Teardrop Explodes album, Wilder was issued in 1981. After the band's dissolution soon after, leadman Julian Cope proceeded to a fruitful, and often avant solo career. Still waiting on those World Shut Your Mouth and Fried reissues...
01. Sleeping Gas
02. Camera Camera
03. Kirby Workers Dream Fades
04. Bouncing Babies
05. All I Am is Loving You
06. Terason
07. Books
08. Take a Chance
09. When I Dream
10. Kwalo Klobinsky's Lullaby
http://www109.zippyshare.com/v/P0jBDVu5/file.html
Posted by spavid at 5:29 PM

Hey, WSYM and Fried were both reissued in 96 (and still sound great) with 3 bonus tracks each. Do you need them?

I really love the sound coming from the piano. Every time that i listen this rhythm i feel comfortable and i can improve my mood. I like to read useful information too, so this blog is amazing. I must to say that i found another one,that i considered interesting too, called costa rica investment opportunities i invite you to visit it.

I heard that this The Teardrop Explodes is a good composition and it really sound so amazing. I haven't heard it played but I wish someday I hear it.

Would love to see Julian Cope live but I doubt he will tour the US anytime soon.