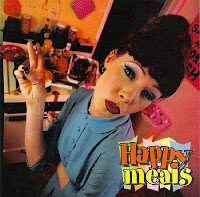 My Records was a fantastic and underappreciated indie label that existed from the late '90s til aound 2003. Proprietor, Joey Cape (of Lagwagon, Bad Astronaut, and Me First & the Gimmie Gimmies fame) had an ear for melodic, riff-roaring rock, the variety that was, and has been absent from mainstream radio for eons now.


In addition to releasing single-artist full lengths and eps by Armchair Martian, Nerf Herder, and singer/songwriter Scott Garth, Cape was also the curator of the My Records Happy Meals compilation series. This post concerns the first of three Happy Meals compilations. For me, this album was not only the most magnificent makeshift "mix tape" I've ever laid ears on, it was my introduction to half-a-dozen bands that I eventually became lifetime devotees of. The quality control here is peerless, with even the handful of not-so-desirable selections still managing to be listenable. On Happy Meals, Cape salvaged the dignity of several recently exiled major-label bands of the moment, including Ridel High, Summercamp, and Nerf Herder winning some new fans over in the process. Bracket, Popsicko, and Armchair Martian, all creme de la creme, high-octane punk-pop outfits, were accorded their rightful slots here, not to mention Cape's aforementioned meal ticket, Lagwagon. Two worthy Australian contingents, Frenzal Rhomb and Body Jar represent the land down under, along with Germany's snotty Terrorgruppe. Did I mention that most of the songs are exclusive to this album?


Indeed, beauty is in the eye of the much fabled beholder, but this compilation really did the trick for me, as did it's two sequels. They don't make 'em like these anymore - and that's the truth. Incidentally, Lagwagon have a new ep making the rounds, not to mention Joey Cape's imminent solo debut.
01. Armchair Martian - Dumb
02. Ridel High - Self Detructive
03. Popsicko - Against You
04. Bracket - Small Talk
05. Jason Pontias - Butt Tatto
06. Lagwagon - Defeat you
07. Summercamp - Johnny
08. Nerf Herder - Sorry
09. Shyster - Homecoming
10. Armchair Martian - Breaking Down
11. Body Jar - Joker
12. Jughead's Revenge - Afraid
13. Terrorgruppe - Sehoner Strand
14. Frenzal Rhomb - Cones
15. Hi-Standard - Saturday Night
https://www117.zippyshare.com/v/9teJOuLP/file.html
Posted by spavid at 4:26 PM

this is great stuff. have you heard Cape's new band with Tim Cullen from Summercamp -The Playing Favorites? im very into it.

btw - i did get my copy of the shufflepuck record from Adam, he was kind enough to mail me a burned copy.

The Playing Favorites are excellent. Tim Cullen came out with a solo album a few years ago, which is the next best thing to a Summercamp follow-up album to Pure Juice

Just checked Adam's Shufflepuck page and will be sending him a cd-r soon. Thanks.