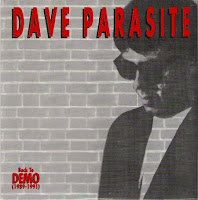 Submitted for you’re approval: six demonstration recordings by Dave Parasite (aka Nikki Parasite), a Jersey boy who migrated to the Bay Area, only to concoct some of the most affecting pop-core punk the world ever laid ears on, via his much championed trio, The Parasites. Only thing was, the “world” wasn’t exactly listening. For the die-hards, like you and me however, this two-fer 7” ep released some eleven years ago on American Pop Project Records (run by Mel Cheplowitz of Shredder zine/records fame) is definitely a treat.

Anybody that knows anything about the Parasites knows that Dave was the only constant member of what’s rumored to be no less than 50 rotating-door participants. On the four-track-recorded Back to Demo, Dave is all hands on deck – guitarist, bassist, percussionist, the works. The record sleeve and title are a blatant-as-can-be parody of Phil “killer” Spector’s classic album Back to Mono. If you ask me, these demos sound like they were recorded in “mono” to begin with (and they likely were). Although the eventual album versions of “You’re Gonna Be Mine” and “When I’m Here With You” outdo these comparatively roughshod demos any day, the essence is completely there. This set also features an exclusive cover of The Buzzcocks rather played-out ‘What Do I Get.”

An underrated song-writer for sure. Their best material is spread all across their discography a problem that Retro-Pop Re-masters, depsite its bludgeoning sound quality, does not fix.

Dave is and was a wonderful songewriter, one day the world will sit up and listen (We hope)
Nice post, thank you

Truley one of the most underrated pop punk bands that came out in the late 80's and early 90's. They never got the same attention as the Queers or Screeching Weasel. Any chance you would happen to have any more early Parasites 7"? Spefically these

I also have a few ep's & demos of the Parasites if you want them?

Ah... as one of the 50 or so members that was in his band, Dave was a character, (you gotta mention the "both sides now video" a truely perverse example of threadbare cartoon aesthetics). I guess he's still going, I was in the band (I was also in four point star at the time, see other review here) it was also Gary of Corduroy (see here as well ) and Ray of Parade/Pariah (1st MRR comp).

Good times opening for Queers/rancid all over the bay area, playing with the then obscure AFI in a basement in Reno.

Great songs, wacky guy,that's all I can say....wonder about his path after our version of the band broke up, wonder if he and Mel are still friends or whether they finally had the mother of all their constant squabbles.

The dude was a consummate pop craftsman.

Would love a re-up! If possible. I've been on a bit of a Parasites kick lately and have never heard this. Thanks!

Would need a re-up, please i can't get it anywhere!!!
Thanks whatever