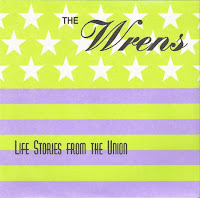 For many of you, The Wrens need no introduction. As one of the most quietly revered indie bands of the '90s (and for that matter, this decade) the Wrens discography is noticeably sparse. Some like myself would even broach such adjectives as 'under-recorded,' given a grand total of three proper albums (and about as many eps) since their late '80s inception. Yet anyone who regards themselves a fan of this Jersey quartet, is a fan as in "fanatical." When they actually get around to recording, the Wrens no doubt toil and agonize to great ends in order to hem together layers upon layers of hyper-harmonies and squalling, but robust guitar and rhythm components, into the truly awe-inspiring end product. To suggest that the Wrens overdo the multi-tracking bit, would be a spot-on accusation, but were they to deprive themselves of their dense, often overwhelming sonic latticework, there would be little point to their existence, frustratingly intermittent as it may be.


Besides their deliriously fantastic 1995 masterwork, Secaucus, I can't think of a better Wrens primer than this halcyon-era single. The A-side, "Life Stories From the Union" can only be found here, while the even better flip, "Our Brightest New Year," technically made another appearance, on the vinyl-incarnation of their third and most recent album 2003's The Meadowlands.


A. Life Stories From the Union
B. Our Brightest New Year

If you could locate good quality rips of Secaucus or the Wrens other early work, I'd build you a shrine.