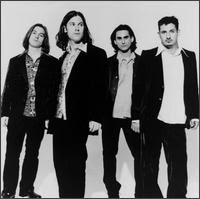 Baltimore, MD's Greenberry Woods barely made a dent nationally, despite recording two of the most perfect, deftly-crafted pop (power and otherwise) albums of the '90s for Sire Records - Rapple Dapple (1994) and Big Money Item (1995). Without over-doing or under-doing anything, the 32 songs the Greenberry Woods laid down between those albums would, and should have been to anyone's fancy, be it the Not Lame set, or for that matter, Joe sixpack. Armed with irresistible hooks and a breezy mid-tempo stride, this quartet's tunes were lost on the mainstream, wholly ironic when they would have made for an ace Top-40 hit machine during any given era.


The Woods brother duo of Matt and Brandt Huseman spilled over into the generally likeminded Splitsville (previously discussed on this blog here and here) by the late '90s, but weren't quite able to replicate the pristine finesse of their former act (not that they tried mind you). Just the two proper Greenberry Woods albums were made public, while the Shorty ep, comprised of Big Money outtakes was only available as a promo release to radio stations. The sterling album track, "Super Geek," leads things off, followed a pair of relatively gritty originals - "Drop Away," and "I Win." The Velvet Underground cover that brings Shorty to a close is a bit too linear for it's own good, but hardly anything to quibble about.


As a bonus, I'm tacking on "Too Good to Be True," a quintessential GW's number that only made it's appearance on the Naked in New York movie soundtrack.

Fantastic. Love these guys, and didn't even know this existed. Can't wait. Thank you.

Oh, yes. When I was going nuts over Greenberry Woods and Splitsville, I got outbid a couple of times on ebay on this.

I really, really like the Greenberry Woods CD's. I have tons of "power pop" and they are among the very best. In part because not all of the songs sound the same.

How do I not have this? I actually have the Naken in NY soundtrack, but not Shorty. Thanks!

Any chance of a re-up please? Cannot find this one anywhere!

Hello, love what you're doing here! Only recently got reintroduced to Greenberry... can you reup this one please?