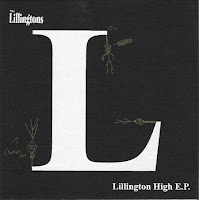 Inspired by equal parts Ramones and Screeching Weasel, The Lillingtons sprouted from the assumedly non-existent punk scene in their native Newcastle, Wyoming (which the last time I checked, boasted a population of 3200 or so) in the mid-90s. In spite of the runaway success of contemporaries Green Day, the Lillingtons opted to play the indie field. Before recording two albums for Lookout Records, Death By Television in 1999, and the absolutely flooring Backchannel Broadcast in 2001, the trio issued a pair of limited edition singles and a split LP with the band Nothing Cool on the far less prolific Clearview Records.

The Lillington High ep featured early versions of four cuts that would be rerecorded for their debut LP, Shit Out of Luck. The songs were nothing short of anthematic, particularly the title track, concerning a daydream of returning to twelfth grade (or maybe eleventh, I dunno) in hopes of claiming the one that got away before she ran off and married some other poor sap. It’s repetitious chant of L-I-L-L-I-N-G-T-O-N-S, no doubt inspired by the Ramones world-famous clarion call “Hey ho, let’s go,” made for perhaps the single most infectious refrain in ‘90s pop-punk history. It was enough to make a believer out even the most jaded of listeners, but alas, it was destine to become a virtually instant cult-classic, and by and large, has stayed that way. The flipside features the nearly as catchy “I Don’t Think She Cares.”


The brunt of The Lillingtons pre-Lookout output has been collected on the Clearview Records three-CD box set, Technically Unsound, which can be obtained fairly inexpensively on Ebay. It does not, however contain these particular takes, which are exclusive to this silk-screened covered 7,” limited to a mere 498 copies - not even enough for everyone in lil’ ol' Newcastle, WY.
01. Smart Ass
02. Lillington High
03. Day Off
04. I Don't Think She Cares
http://www21.zippyshare.com/v/8261338/file.html
Posted by spavid at 12:45 PM

Thanks for posting this. The lillingtons were always a fun band that combined infectious music with uncomplicated attitudes. They made putting out records fun. . .and we, Clearview, did the best we could. But you are correct, we were nothing approaching prolific. I think the word measured was more applicable. Keep up the good work; I enjoy you blog a lot.

I'd love a re-up of this, if you get a chance. Cheers.