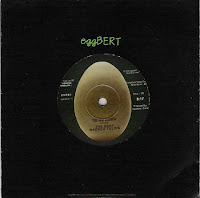 The short story: Bent Backed Tulips was Dramarama incognito, circa 1988.

The long story: As the legend goes, when Dramarama were set to track their third album, Stuck In Wonderamaland (featuring the brilliant should-have-been-hit "Last Cigarette") head honcho John Easdale arrived to the studio with nearly a box sets worth of material written.  Problem was, their label at the time, Chameleon Records, wanted a record of a more traditional length, and ultimately, that's what they and the band's adoring fans received in the form of the aforementioned Stuck...  The outtakes were not left on the cutting room floor however, at least not until 1994, when the band sanctioned the release of them under the alias, The Bent Backed Tulips ostensibly to avoid any legal wrangling with their previous labels.  Released as a 20 track CD on Eggbert Records, titled Looking Through... the great "lost" Dramarama album finally made it to market, at least in the US, but that's another story.

Coinciding with the issue of Looking Through... this single was released, featuring the rip-roaring LP scorcher "Tie Me Down," and it's exclusive flipside offering a reading of Morrissey's solo chestnut, "The Last of the Famous International Playboys."  It's a damn fine interpretation at that, reminding you once again why you fell in love with Moz in the first place.  While the single may not be available at this point, the Looking Through... album is, directly from Eggbert Records in fact, and quite possibly through iTunes and the like.

A. Tie Me Down
B. The Last of the Famous International Playboys

It should be mentioned that "Looking Through..." was released on two occasions actually. Originally on New Rose Records and then again much later (the time of this single) on Eggbert Records, hence the egg in the apple parody. "Playboys" was also released long before this single as a track on one of those "radio only" CDs akin to the stuff Westwood One would publish.

Awesome find. Saw Dramamrama 2006 or so in Annapolis, MD.
They were great.
Would love a repost/reup if you get the chance.
Thanks

Not sure how I missed this one but if there is any chance of a re-up, it would greatly be appreciated! Thanks in advance...

Thank you for the re-post!!!

Dramarama new album "Color TV" will be released this Friday. First in 15 years!

I missed that one too. Could you re-up the link please ;-)