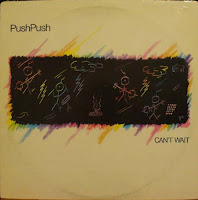 Shopping for obscure vinyl is a wonderful past time, and Bleecker Street Records in New York is a good pitstop.  While I was there a few weeks ago I stumbled upon this record by the Boston-based Push Push.  Without much prior knowledge on them, I unearthed up with this useful commentary from New Wave Outpost:

Roots rockers Push Push had a major (and majorly-overplayed) Boston area hit in '85 with "This Kind of Love." Originally only released as a radio tape and promotional video, it became commercially available years after the fact on their lone album "Can't Wait" (Tone Cool, 1988 - released early '89) -- by which point, nobody cared anymore. Frontman Dennis Brennan has since gone solo with a number of albums under his belt. His (very different) solo version of "This Kind of Love" can be downloaded on iTunes and the like, but as far as I can tell, the Push Push original can't be.

I think the "roots rock" mention is a bit of a misnomer.  In fact, they were certainly less rootsy than hometown contemporaries the Del Fuegos.  Otherwise Push Push had vague commercial/AOR appeal a la Translator and the like.  Some nice jangly action permeates "I Taught Her Everything She Knows" and "Step By Step," and I really enjoy the band's self-titled song that closes Can't Wait out.  As mentioned in the notes above, singer/guitarist Dennis Brennan has issued solo material that you can update yourself on at his website, plus the discography section sheds some additional light on the Push Push album that is yours for the taking at the click of a button.

thanks for this one
its excellent